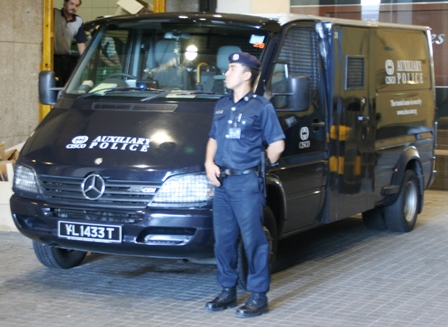 I am not surprised with this drastic move by Certis Cisco to hire Auxiliary Police Officers (APO) from Taiwan. There are already 1.3 million foreign workers here ranging from the low-wage-500,000-construction-workers, to top-of-the-range-EP-foreign-talent.

Many of these Employment Pass (EP) holders earn half a million dollars and upwards – especially those in the banking sector. All this when many Singaporeans are still jobless or working as part-time workers in a very bad economic cycle.

Certis security guards use to hail mainly from Malaysia, but what irks many is probably the high pay scale for the new hires from Taiwan. Why the disparity and discrimination?

Paying close to $2,700 a month? I am sure many Singaporeans or current Certis Cisco guards will be up in arms against the latest hiring frenzy.

Most local Cisco guards earn an average of $2,200 with over-time and some good shift allowance. It’s a tough job with very few local takers, which is why more than 60 percent of our Cisco guards are foreigners.

These new Taiwanese recruits are probably graduates and so justify the latest high pay scale, but why not employ our own people first before looking abroad?

I am sure at $2,700 a month such vacancies will be even more attractive for our own local graduates – many of whom are still looking for work after graduating for many months.

Or is this perhaps tit-for-tat feisty show to the big-brother who has been holding our military armoured vehicles?

Most sovereign countries will threaten war if their weaponry is seized in such a unceremonious manner, but our country is too small even to protest vehemently against the low-blow bullying tactic.

If approving of the hiring of Certis Cisco guards from Taiwan is how the Singapore government chooses to protest against China, I feel that it is unwarranted and may anger them even more.

China would be against anyone cozying up too closely with Taiwan, which it considers a renegade province. Even Trump got the long end of the stick when he inched closer to them with a mere phone call.

On the local front, such a hiring move will annoy many Singaporeans who have long believed that our government is very pro-employer in it’s employment policy.

From lawyers to doctors to IT experts, our government has opened our doors widely for foreigners to compete in our own turf – sometimes with more favourable conditions.

The only frustrating paradox is the huge percentage of votes PAP received during the recent 2015 General Election, especially when so many people seem to be so clearly against the government’s pro-foreigner manpower policy.

Its no wonder many are looking at migration as a way out of the stressful foreigner-first city state.