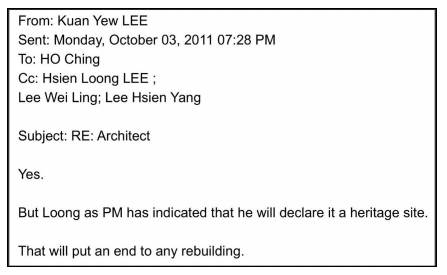 Dr Lee Wei Ling and Lee Hsien Yang have returned fire this morning, with a new statement on the Oxley Road saga disputing Prime Minister Lee Hsien Loong’s account of events relating to talk on the demolition of 38 Oxley Road.

Releasing supporting documents, they also alleged that PM Lee misled their father Lee Kuan Yew into believing that the Government had already gazetted the house for preservation as a heritage site and that the Prime Minister tried to “play with words” on the issue in Parliament.

The siblings are countering allegations that the Prime Minister made in a 5-hour parliamentary sitting yesterday that Lee Kuan Yew’s decision on demolishing their family home was not “black and white”.

In speaking to the South China Morning Post, Lee Hsien Yang, “From 2010, LHL [Lee Hsien Loong] improperly misrepresented to our father LKY [Lee Kuan Yew] that gazetting of 38 Oxley Road was either ‘inevitable’ or that the house was already gazetted. We now know that no decision had been made.”

“Lee Hsien Loong has tried to play with words, asserting that just because Lee Kuan Yew left instructions for what to do if the house was gazetted, that means that he ‘accepted’ that the house would be gazetted.”

One of the emails that has been released by the siblings from 6 September 2012 reveals that Lee Kuan Yew wrote to his lawyer Kwa Kim Li: “Although it has been gazetted as a heritage house it is still mine as owner… Cabinet has opposed tearing it down and rebuilding, because 2 PMs have lived in the house, me and Loong.”

Wei Ling and I reply:https://goo.gl/VRhwiC