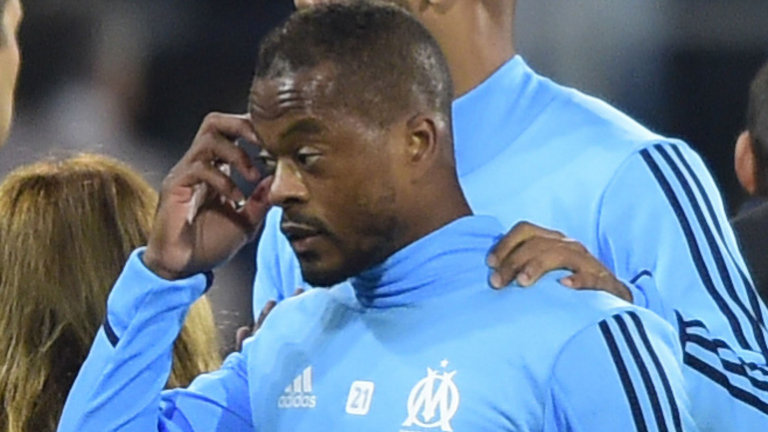 KICKING out at a football fan is sacrilege and almost like a player, professional or amateur, shooting his own foot.

Such violent conduct is simply unacceptable in any corner of the sporting world and however imperfect we are, and with that imperfections come thick-headed decisions and violent, knee-jerk reactions.

I gasped in disbelief when I saw former Manchester United and French defender Patrice Evra let fly a Cantona-like high left-kick before the Europa League match against Portuguese side Vitoria de Guimaraes on Thursday. He was in a Marseille jersey and witnesses say Evra was persistently jeered, ironically by a section of the Marseille crowd, which provoked his pre-match gangster-styled attack.

Footage shows Evra vaulting advertising hoardings and demanding that the fans join him pitch-side. As one angry fan sprinted towards him, the defender instinctively put out his fist and landed a punch on the aggressor’s face.

Evra was quickly pulled away by his team-mates but sneaked around the group of players and executed a kung-fu style kick on the head of an unsuspecting supporter. He was not allowed to start the match by referee Tamas Bognar.

The crazy dust-up was reminiscent of the globally infamous Eric Cantona incident in  January 1995. Manchester United’s Frenchman-hero Cantona was sent off at Selhurst Park after he launched himself at a Crystal Palace fan on his way to the dressing room. He was later banned nine months.

In my opinion, whatever the provocation, a veteran 36-year-old Senegal-born professional like Evra, or even Cantona 22 years ago, must show more commonsense and accept jeers and boos in the face of whatever psychological attack as an occupational hazard.

Sensibly, some good sense prevailed and Marseille formally condemned Evra and the fan for the unsporting behaviour. Unsurprisingly, Marseille have since announced his indefinite suspension.

Evra definitely faces stern Uefa (European Football Union) action at a disciplinary hearing on November 10. He faces charges of violent conduct and he must realise that this is not his first scuffle. In 2008, he was banned for four games after clashing with a Chelsea groundsman.

Former Malaysia Cup defender of the 1970s’ ‘Kallang Roar’ fame Robert Sim says: “Footballers have an obligation to football and the fans. No matter what happens, a professional player must keep his cool. He must maintain discipline and self-control despite provocations and insults, no matter how unjustified they may be. Remember, any wrong move can be detrimental and dangerous to the player and team.”

Hockey legend Arul Subramaniam, who won the 1973 SEA (South-East Asia) Games gold-medal, and a die-hard Manchester United fan, echoes: “I’m really disappointed as a die-hard Red Devils fan since 1958. Severe disciplinary action must be taken to teach Evra and other errant players that off-the-field violent behaviour, especially against fans, will never be tolerated. It could well spark to unnecessary riots.”

Several leading European newspapers said this might spell the end of the career of Evra, who won five Premier League titles and the Champions League during eight years at Manchester United. He joined Marseille from Juventus in January but has made only two appearances this season.

Leading French online newspaper L’Equipe seriously warns: “Patrice Evra may have signed the end of his professional career yesterday. Automatically deprived of traveling to Konyaspor in three weeks, he risks a very heavy sanction from the disciplinary body of the European body, uncompromising on the facts of violence or racism in recent years. Depending on the seriousness of the facts reported in the referee’s report, he could be suspended for several months.”

Going by hard-core Marseille football tradition, it’s likely the ultra-passionate fans at the Stade Velodrome simply won’t let Evra pull on a shirt again. Attacking one of them, whatever the provocation, definitely takes Evra past the point of no return.

From Cantona in January 1995 to this latest Evra shameful act, every player must know never ever to cross a sacred line: To confront or ever attack a fan.

There’s never sympathy for the errant player as even England’s 1966 World Cup hero Sir Trevor Brooking, among others, even described the Cantona act as ‘the most horrendous incident involving a player I have ever witnessed at an English football ground’.

The most commonly used adjective in the coverage of Cantona’s assault, and the subsequent court case and nine-month ban from football imposed on the Frenchman, was ‘shameful’. Likewise, 22 years later in Marseille, the shame intensifies.

But I ask the most important question of all: Why? Why had it happened?

Yes, from Singapore to Sri Lanka, Malaysia to Macau, England to Ethiopia, the talking point will be on the who, what, where and when of the Marseille incident which were detailed in many thousands of words.

The widespread conclusion is that the former ‘Red Devil’ Evra, like Cantona, should be banned for to stop a No 1 sport from dying in shame. Bringing the game into disrepute in a violent way is simply unforgivable.

On the other side of the coin, seldom analysed by pundits, are the behaviour of some fans, tribalistic and even racialistic with so much hate.

“We’ve heard a lot about Cantona’s responsibilities,” England football legend Jimmy Greaves says.  “What about analysing the responsibility of  the Crystal Palace fan and every foul-mouthed yob who thinks his £10 admission gives him the right to say what he likes to a man…to abuse, taunt, spit and behave in a way that would get you locked up if you repeated it in the high street.’

I understand the fan-violence frustration because as a FAS Class One referee, I was attacked by an angry fan at Queenstown Stadium in the Tiong Bahru versus Jurong Town NFL (National Football League) match in February 1989. But quick police intervention saw the fan jailed for three weeks and fined – the first act of stern anti-fan action, which sent a clear message to supporters not to take the law into their own hands in the field of play.

Likewise, I doubt seeing Evra ever playing for Marseille as he has to accept the self-imposed punishment that he has to move to another country as home fans are unlikely to forgive him, no matter how much he justifies his action for the prolonged insults on him and his family.

As Marseille formally said in a statement: “A professional player must maintain self-control despite provocations and insults, no matter how unjustified they may be.”

Bottom line: Attacking a fan, for better or for worse, is unforgivable. It is sacrilege.

It’s like shooting your own foot as such violent conduct is simply unacceptable in any corner of the world.Follow us on Social Media