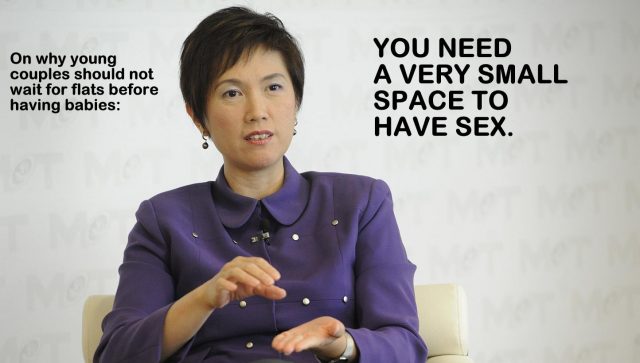 I address this blog to my fellow younger citizens, Singaporeans of my children’s generation, born in the 1990’s. “Sex in small places” concerns them. Beyond the funny responses and factual criticisms is a bigger issue at stake – the mindsetof the ministers they vote for, whose thinking will influence their future, their lives. It’s much more than just sex and is surely no small matter.

Josephine Teo had all the time in the world to reply to the “question on whether young people are not getting their flats early enough to have children.” But with a straight face, Mrs Teo declared:

“You need a very small space to have sex.”

She cannot try to wiggle her way out by claiming that her reported words “might not have captured everything in the way I intended.” And, now, wants to switch to “an honest conversation on how, as a society, we can get ready for Millennial family.”

Unless, of course, she’s (Alice in Wonderland) Humpty Dumpty, “When I use a word,” Humpty Dumpty said, in rather a scornful tone, “it means just what I choose it to mean—neither more nor less.” Nope. ‘You need a very small space to have sex’ is basic
subject-verb-object English with simple words whose meaning is clear enough.

Aside from the avalanche of responses directly engaging her “sex in small spaces”, the more relevant question, themindset issue is, “What informs such a cheeky, cavalier, condescending reply from a senior minister?” Or, what guides her to reply with the words she did?

To uncover what’s behind her reply, we just need to ask her a simple question:

“Would Josephine Teo tell that to her own three children, would she?”

It’s highly unlikely, if not rather obvious, that as a mother, she would not tell that her own children. So, why is she dishing out such advice to our millennial citizens?

Because “sex in small places” applies and is good enough for little people, for peasants. The retort is similar in vein to another minister asking, “Do you want three meals in a hawker centre, food court or restaurant?” It’s pompous and patronizing. But it’s how an ‘actsy-borak’ airhead would talk to those she considers to be beneath her station in life, simpletons, peasants.

So, “sex in small places” reveals a mindset that thinks…

My fellow younger citizens, you and your lives are no more than a problem for the PAP ministers to solve, to social-experiment. You are a digit, a number in their statistics game, another brick in the wall.

You can either believe Josephine’s doublespeak, “In this day and age, it is not possible for us to say that you are somehow bad, you are not doing your part for society”. Or, you can put the pieces of how she and her colleagues have been talking down to, patronizing us on various matters to form the consistent picture of who they really are, what they think of us. They reveal their true selves unconsciously, inadvertently, unintentionally by how they answer to our concerns. For out of the abundance of the heart the mouth speaks
.
The truth, my young friends, is they want to mould you into happy idiots….

I’m going to be a happy idiot
And struggle for the legal tender
Where the ads take aim and lay their claim
To the heart and the soul of the spender
And believe in whatever may lie
In those things that money can buy
Though true love could have been a contender
Are you there?
Say a prayer for the Pretender
Who started out so young and strong
Only to surrender
…Jackson Browne, 1976, (* with apologies)

So, Josephine, would you tell your own children, your colleagues’ children, “You need a very small space to have sex”? Would you? If not, why say that to our children?

—
Republished from the blog ‘2econdsight‘.Follow us on Social Media