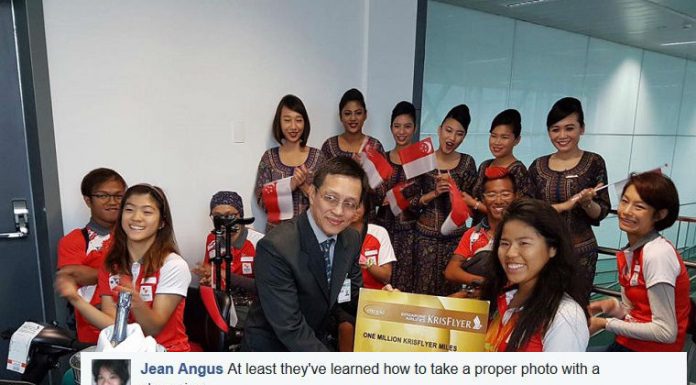 The following is a letter by one of our readers, Frank.

—
When Joseph Schooling won our very first Olympic Gold, everybody wanted a part of him capitalizing on his remarkable feat to advance their selfish interests at no charge. SIA, McDonald’s, SMRT, SPH etc even the PAP government.

The entire of Joseph Schooling’s swimming and educational career was funded by his parents, Colin Schooling & May Schooling, monetizing their private home, downgrading to a HDB flat in Marine Parade. Nobody gave a damn.

The picture above taken by SIA with Joseph Schooling immediately after his Olympics Golden feat drew immense criticisms from the general public, both offline and online for the following reasons:-

The onslaught and backlash was vehement, it resulted in a cyber-storm, especially on Facebook and numerous social media.

SIA is now conducting a private inquiry into this publicity disaster causing considerable damage to its Brand Management.

Today, our Paralympic medalists, Yip Pin Xiu and Theresa Goh were honored by SIA on their journey back home from the Rio 2016 Paralympic Games.

This time round, SIA has learned their lessons, albeit the hard way. They learned to take proper pictures with our Paralympic medalists.