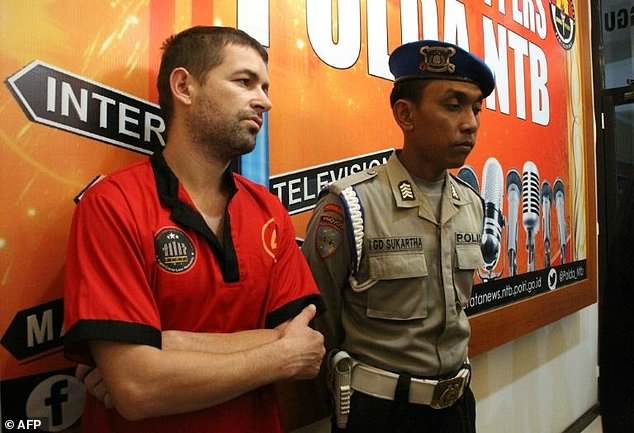 THIS may well remind you of scenes from any Asian movie-world where saws and sarongs were used to break free from an Indonesian jail, in a country with some of the world’s toughest narcotics sentences, including the death penalty.

But the daring escape of Felix Dorfin (above, left) from a police detention centre on Lombok island is the jail-bird talking point as the 35-year-old, described by police as a “professional drug courier”, awaits trial in a possible death-penalty case.

Embarrassed Indonesian police have launched a manhunt to find the fugitive who broke out by sawing through bars on a second floor window and rappelling to freedom with a sarong.

“He escaped through the window on the second floor in the detention centre and, using a sarong and curtains which were tied together, he climbed down and then escaped,” says West Nusa Tenggara police spokesman Komang Suartana.

Police believe Dorfin is still on Lombok and have deployed officers to scour the island to search for him, Suartana added.

The Frenchman was arrested in September last year, allegedly carrying a false-bottomed suitcase filled with four kilogrammes of drugs, including cocaine, ecstasy and amphetamines, at the airport on the holiday island next to Bali.

He allegedly carrying IDR3.2 billion (US$212,597) worth of drugs, at Lombok’s Zainuddin Abdul Madjid International Airport. For this job, in which he was busted, Dorfin told investigators he would have received EUR5,000.

HE ATTEMPTED SUICIDE WHEN ARRESTED

Before police detained him, he apparently tried to flee through the airport exit and ditch his luggage when Customs wanted to more thoroughly inspect his bags. But he was secured by airport security before he could get away, and even after the Frenchman was detained, he allegedly attempted suicide.

“He said, ‘Better I die now than shot if sentenced to death.’ He even had the chance to bang his head on the examination table at the Mataram Customs Office. He was classified as reckless, so we have guarded him tightly,” Mataram Customs daily acting director Wayan Tapamuka told the media.

It was not clear whether prosecutors would now seek Dorfin’s execution if he was convicted. But Indonesia has some of the world’s strictest drug laws, including death penalty sentences for some traffickers.

Indonesia has executed several foreign drug smugglers in the past including Australians Andrew Chan and Myuran Sukumaran, who were ringleaders of the notorious Bali Nine heroin smuggling gang and faced the firing squad in 2015.

For over 12 years, Serge Atlaoui, a convicted French drug smuggler, has been on death row.

High-profile cases like that of Australian national Schapelle Corby, who spent more than nine years behind bars for smuggling marijuana into Bali, have stoked concern that Indonesia is becoming an international  drug destination. Corby was deported in 2017 after several years of parole.

Jail-breaks, like what you see in the popular movies, are reportedly common in Indonesia, where inmates are often held in unsanitary conditions at overcrowded and poorly guarded prisons.

In 2017, four foreign inmates tunnelled their way out of a Bali prison at Kerobokan. Three of the fugitives were captured a few days later, while the fourth, an Australian, is still on the run.

The jail-break sagas continue within the walls of the prison — just a stone’s throw from some of Asia’s most exclusive beach resorts — and in many of Indonesia’s hundreds of other penitentiaries.

Simply because prisons are overcrowded and have far too few guards. Corrupt staff members provide wealthier inmates with drugs, outings and even prostitutes, say analysts who have studied the corrections system. And guards have been accused of complicity in some escapes and incompetence in others, including the one at Kerobokan, which has become the latest symbol of the system’s many woes.

“It sadly does reflect the dysfunction,” says Leopold Sudaryono, an Indonesian doctoral scholar in criminology at Australian National University. He points out that prison guards, on average, earn only about US$300 a month.

That could help explain guards’ susceptibility to bribery, and the chaos behind prison walls. At Kerobokan Prison, inmates with money, often foreigners, regularly pay staff members to deliver drugs and alcohol, escort them on daytime excursions to Bali’s beaches and bring prostitutes into the prison.

This is according to Kathryn Bonella, author of “Hotel Kerobokan: The Shocking Story of Bali’s Most Notorious Jail.” Other analysts who have studied the prison system have described similar examples of corruption.

“I don’t think there’s any great attempt to reform the prisons. They are packing them in like sardines,” says Bonella matter-of-factly.