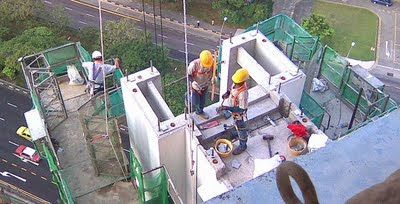 The former states that “To make lifts safer and more reliable, all People’s Action Party (PAP) town councils will join hands and pump in a total of $45 million between them over the next five years.

This will go towards implementing recommendations unveiled by the PAP Town Councils Lift Taskforce yesterday, which the 15 town councils have accepted.

Set up in July and led by PAP town councils’ coordinating chairman Teo Ho Pin, the task force made its recommendations upon the completion of a study to improve lift safety and reliability.

Recent spate of accidents and injuries

Housing Board lift issues have been in the spotlight in recent years after a spate of accidents and injuries.

Another is for all PAP town councils to undergo the HDB’s Lift Enhancement Programme (LEP).

For this optional scheme, the Government has set aside about $450 million over 10 years to co-fund 90 per cent of lift modernisation works. Town councils pay the rest. “The PAP town councils will prioritise the LEP implementation over the next 10 years based on the age and performance of the lifts,” the task force said.

All PAP town councils should also conduct cost analysis on lift spending, provide information on lift contractor performance to HDB for tender evaluation, and develop a protocol for the use of lifts by renovation contractors.”

The latter states that “The Workers’ Party-run Aljunied-Hougang Town Council (AHTC) expects to spend $17.5 million to replace selected lifts over the next five years, ahead of those lifts’ usual 28-year lifespan.

The AHTC, which manages more than 1,700 lifts, also gave details of how it plans to implement the Housing Board’s Lift Enhancement Programme (LEP), which helps town councils fund the installation of recommended lift features.

In a statement, AHTC chairman Pritam Singh noted that lift maintenance and part replacement costs have been rising.

The town council’s lift department continues to review the scope of maintenance works needed for each age group of lifts, he added.

Earlier upgrading or replacement of lifts

Under HDB guidelines, lifts are scheduled for major upgrading or replacement after 28 years.

The AHTC plans to “progressively schedule lifts nearing the 15-year mark of their lifespan” for the LEP, roughly corresponding to the halfway point of the recommended lifespan. But the AHTC also noted that some older lifts had critical parts which became obsolete earlier than the 28-year guideline, “contributing to frequent breakdowns”.

It will thus replace selected lifts ahead of the 28-year guideline.

On Oct 6, it issued a tender for the installation of 20 new lifts in Aljunied GRC. Over the next four years, it will call similar tenders to replace selected lifts.

“Over a five-year period, the overall cost of this lift replacement exercise, funded chiefly through the town council’s sinking fund, is estimated to cost, at current prices, approximately $17.5 million,” said Mr Singh.”

Singapore – A former business development executive was sentenced to five months in jail on Thursday (Nov 19) on three cheating-related charges over Covid-19 relief funds. Chow Jia Chuan, 29, resigned from IT firm Tabsquare in April because he disliked his job...
View Post
Featured News

Singapore – A man was charged in court on Friday (Nov 20) with criminal trespass and  defiling a statue of Mary in a church along Upper Serangoon Road. Race Koh Jun Xian, 37, was alleged to have committed the offences at the...
View Post
Featured News

Singapore — At least two groups have submitted the names of their candidates for appointment as  Nominated Members of Parliament (NMPs), only days before the submission deadline of 4.30 pm on Monday (Nov 23). They are the National Trades Union Congress (NTUC)...
View Post
Please follow and like us: