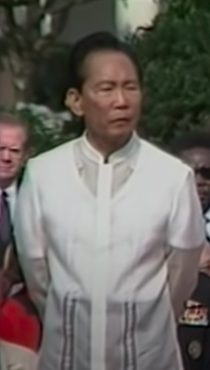 In the midst of the most dangerous threat and damage inflicted by Covid-19 on our nation, the region and humankind as a whole it does seem far fetched for the foreign secretary of Malaysia’s closest neighbour in the East to claim that Sabah was not Malaysian territory. Teodoro Locsin Jr, aged 71 has further muddied the placid and pleasant bilateral relations with Malaysia by saying that Sabah not being part of Malaysia was historically factual.

This issue was considered a closed matter from the late 1970s and early 1980s. Arturo Tolentino, Minister of State for Foreign Affairs of the Philippines said so in June 1980.
Prior to that President Ferdinand Marcos while addressing the ASEAN Summit on August 4-5 1977 had this to say:

“As a contribution, therefore I say in earnest to the future of ASEAN. I wish to announce that the government of the Republic of the Philippines (is) therefore taking definite steps to eliminate one of the burdens of ASEAN- the claim of the Philippine Republic to Sabah.”
President Marcos, a brilliant lawyer and an impressive orator was speaking extemporaneously. It was the greatest surprise of that summit hosted by Malaysian Prime Minister Datuk (as he was then) Hussein Onn, a soldier, statesman and perhaps the country’s most decent and distinguished prime minister after the Tunku. There was the loudest applause to Marcos’ announcement. Sharing the stage with them were three other leaders- President Suharto of Indonesia, Prime Minister Lee Kuan Yew of Singapore and Prime Minister Thanin Kraivichien of Thailand.

The Philippines President stole the show that day.
The next leader to speak, Mr Lee conceded that he knew who would get the following day’s news headlines. President Marcos’ reconciliation to accepting and affirming that Sabah was an integral part of Malaysia was a magnanimous and pragmatic gesture attesting to the anticipated viability and vitality of ASEAN, the greatest force for peace, stability and prosperity in the postcolonial world. ASEAN today is a positive force of 10 countries, double that of 1977.

Long before the statement by President Marcos the Royal Thai Government had provided their good offices to resolve this issue . The bilateral talks were to have been held at Saranrom Palace which accommodated the Ministry of Foreign Affairs in Bangkok from March 1925. The Malaysian Delegation consisted of the Attorney General, Tan Sri Abdul Kadir Yusof, the Permanent Secretary of Foreign Affairs, Tan Sri M Ghazal Shafie, legal advisor Radhakrishnan Ramani and the Malaysian ambassador to Thailand , Tengku Ngah Mohamed Tengku Sri Akar.

The Philippines Delegation , as narrated by a senior Philippines diplomat, Pedro Angara Aragon, then stationed in Bangkok, had at least 30 lawyers. It was led by Carlos Romulu, the then Foreign Secretary. The room originally allotted by the Thai Foreign Ministry could not accommodate the two delegations. The Thai Government then moved the venue for the talks to the Erawan Hotel. The talks were held in June/July 1968.

At the Erawan Hotel after some pleasantries the talks commenced and at least three of the Philippines lawyers spoke over a period of a fortnight. The Malaysian Delegation politely listened and when it was their turn to speak Tan Sri Kadir asked Mr Ramani if he wished to reply. Ramani apparently spoke without any notes but rebutted every point that had been raised. It was in that rebuttal that Ramani had spoken of the claim by Philippines as one based on a mixture of ‘ fantasy fact and fiction.‘

News of this statement leaked out and the following day’s Manila Times had called Ramani Malaysia’s ‘one-man demolition squad.’ Some newspapers had also reported that Mr Romulu had been left speechless by Ramani’s assertion denying the claim by calling it ‘tedious, tendentious and tenacious.’

While Mr Locsin may feel tempted to latch on to a lament of the past given the long lockdown in Manila and resurrect the defunct claim he should not overlook the overarching longer term and larger interest of the cordial bilateral ties and the priceless preciousness of amicable ASEAN camaraderie.

Dato M Santhananaban is a retired ambassador with 45 years of public sector experience. He served in Lagos in 1975/6 where he got acquainted with Mr Pedro Angara Aragon the then Philippines Ambassador to Nigeria and subsequently ambassador to Pakistan.Follow us on Social Media