Ruangguru co-founder speaks at UN high-level forum on education, stressing on accountability and use of machine learning 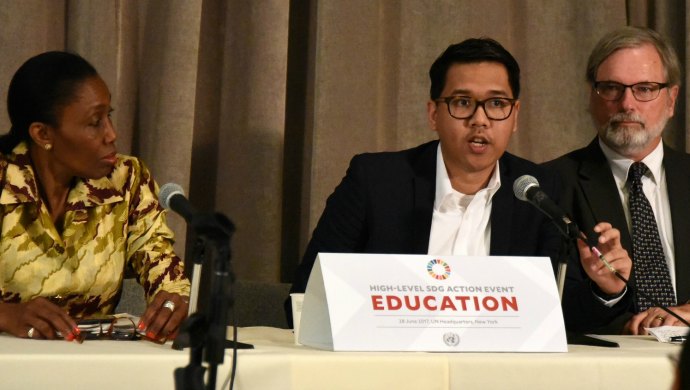 Indonesian edutech startup Ruangguru announced that its co-founder and Chief Product Officer Iman Usman has spoken at the High-Level SDG Action Event on Education, held by the Office of the President of the United Nations (UN) General Assembly in New York on Wednesday.

Usman was one of the six education activists to speak on the forum that focusses on the fourth goal of the UN’s Sustainable Development Goals (SDGs), which is education.

According to a press statement, in the forum Usman spoke about “the importance of accountability in implementing educational policies around the world, and how youths can be more involved in the process through the use of technology.”

He also spoke about the use of machine learning and data produced by the Ruangguru platform in helping the government create policies.

“Ruangguru believes that technology is the key to [solve the issues of] unequal access to education in national education sector,” Usman said.

The Ruangguru co-founder was also involved in the youth panel of Education Commission, a UN commission with the goal to give recommendations on funding for global education.

The UN launched the SDGs on September 2015 as a form of commitment from member countries to “end poverty, protect the planet, and ensure prosperity for all.”

It consists of 17 agenda ranging from gender equality, poverty reduction, to access to clean water source.

The Education agenda aims to push for and ensure inclusive, quality education and lifelong learning opportunity for every person.

The SDGs encourages the participation of governments, private sector, civil society, and individuals in achieving the goals.

As for Ruangguru, the South Jakarta-based startup has recently been reported to have closed a US$7-8 million Series B funding round, following a grant from global mobile operator trade body GSMA.

The post Ruangguru co-founder speaks at UN high-level forum on education, stressing on accountability and use of machine learning appeared first on e27.