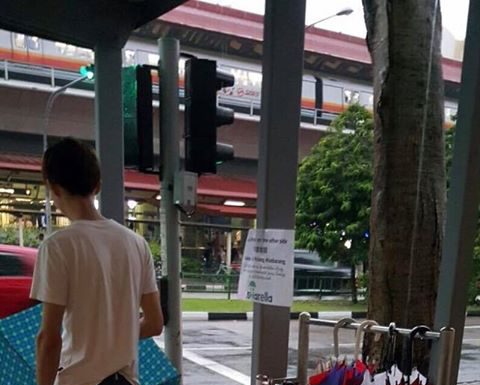 Would you spend millions of dollars to build a sheltered linkway to shield pedestrians from rain when you have to build it to be above 4.5m high to accommodate heavy vehicles? Wouldn’t the sheer height of the linkway fail to adequately shelter pedestrians in the event of a downpour?

According to Education Minister Ong Ye Kung, “this is the problem infrastructure planners faced across Singapore.” That is, until a few Republic Polytechnic (RP) students found a simple solution by pioneering an umbrella sharing initiative.

Dubbed Sharella, the pilot project initially failed when it was introduced for the first time at Sembawang. Two racks of umbrellas were placed on either side of a traffic crossing near the Sembawang MRT Station that did not have a covered linkway overhead. A few hours later, all the umbrellas were gone – pedestrians had allegedly thought that a product promotion was going on.

Volunteers, however, didn’t give up. They topped up the umbrellas and milled around the rack, explaining how the program works to pedestrians. Soon, pedestrians began using the umbrellas as intended and some apparently began contributing their own umbrellas to the racks as well.

The road is wide, there will be heavy vehicles, so any covered link way will need to be minimum 4.5m high, which means…

The post quickly trended online, with netizens lauding the initiative:

One Tampines Resident convinced his MP, Baey Yam Keng, to implement the program in his constituency, as well: