The Independent Singapore News
Home News Featured News PSP’s Tan Cheng Bock: “I am actually quite proud of that performance”

PSP’s Tan Cheng Bock: “I am actually quite proud of that performance” 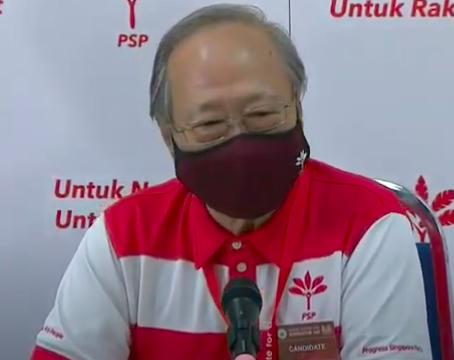 Giving a speech after the electoral results for the Progress Singapore Party (PSP), Secretary-General Dr Tan Cheng Bock thanked voters for their support.

He said: “My young team didn’t win a seat but I must say we have caused an effect in this General Elections. We may not have won the seats but if you look at the level of support given to the PSP candidates, (it) will roughly go to I think an average of about 40 per cent. That is my guess. So an average of 40 per cent for a new party”.

The People’s Action Party (PAP) team emerged victorious at the West Coast Group Representation Constituency (GRC) in this year’s elections, winning against the Progress Singapore Party (PSP), with 51.69 per cent of the votes.

“I am actually quite proud of that performance. I think it is a beginning of a new chapter for PSP and I think the movement that I created will grow. We aren’t too deterred by this disappointment because I think the team that I have built will go further in the next election. I told them, I told my men, sometimes, you get defeated once but next round we will come back”, Dr Tan added.

“Our GRCs performed very well. For the singles it is about there, maybe just 39 (per cent). So I think on average we have really done pretty well and I will like to say that we will continue to work in the areas that we have stood”, said Dr Tan.

Led by Dr Tan, the PSP has fielded 24 candidates in this General Election.