Dr Tan added that his team members informed him “that regrettably, someone had torn down our PSP posters for the constituency of Chua Chu Kang. A police report has been made”.

Following Nomination Day yesterday (Jun 30), campaigning had begun and posters for all parties were already put up across the country.

In his post, Dr Tan wrote that the candidates “are not deterred” despite the incident.

“In the heat of campaigning, our emotions can get carried away. But this is only Day 1 and we still have a long way to go. Let’s remember to keep cool heads”, he advised.

In his Facebook post the PSP Chief also shared photos of the torn posters. The posters were put up alongside those of the People’s Action Party (PAP). 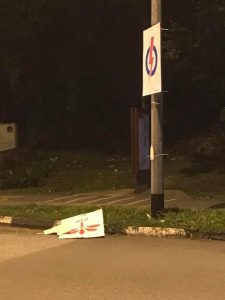