In a surprise development, the rider himself writes in to thank the motorist for his help

Singapore — A motorist who helped a GrabFood rider when he collapsed suddenly on his motorcycle has received much praise online.

The motorist, Mr Kelvin Tay, had posted about the incident with a call for more empathy to be shown to delivery riders. His Facebook post has been shared more than 5,000 times.

On my way home after sending Kaleb to school, met this grab food rider who suddenly collapse with his bike…. Went down…

Mr Tay, who included photos of the delivery rider on his motorcycle and sitting on the pavement, wrote that the man “looked very pale” and that his body was cold. The rider kept telling him that his stomach was painful.

Mr Tay said that his post was not to draw attention to his act of kindness but to help people understand that the food delivery business is hard work for the men and women who do it.

He added that, as a former delivery person himself, he had a special understanding of the hardships of the job. “I know and understand how tough it can be.”

He also took the opportunity to emphasise the importance of health. He said: “Health comes 1st. If really feeling unwell, take the day to rest and nurse your health back. Hopefully this young man will recover soon and be back on his delivery route again …”

Those who commented on his post thanked Mr Tay for helping the delivery rider. To which he modestly replied that anyone would have done the same.

Others echoed his call for empathy

In the comments, Mr Tay again appealed for greater understanding and empathy.

In a surprise development, the rider himself, Mr Ashton Goh, wrote to thank Mr Tay for his help. He explained that the abdominal pain was so intense that he had almost blacked out.

In response, those commenting on the post advised Mr Goh to take care. 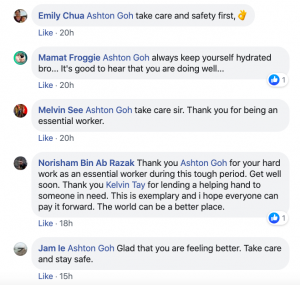 At least one person praised Mr Goh for wanting to finish his last delivery although he was unwell.