The Independent Singapore News
Home News Poor python was not removed correctly from the lamppost; may have suffered...

Poor python was not removed correctly from the lamppost; may have suffered injuries – ACRES 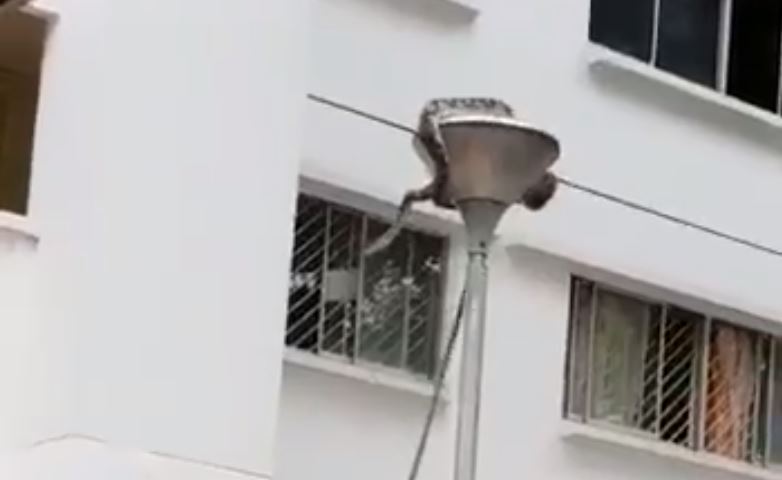 Animal Concerns Research & Education Society (Acres) has said that the removal of the python, that was seen coiled around a lamp post at Block 419 Bukit Batok West Avenue 2 yesterday morning, was incorrect.

It also expressed concerns that the reptile – believed to be a reticulated python – may have been injured from the poor handling and the fall it suffered:

Posted by The Independent Singapore on Monday, 23 October 2017

The man in the video who is shown trying to capture the snake is believed to be from a pest control company. Bystanders looked on as he tried to capture the python and exclaimed loudly when the python fell to the ground with an audible thud.

The python was later put into a sack by the pest control personnel and two police officers.

According to the Chinese daily, a resident at Block 419 first spotted the snake at a basketball court at 5am, when he looked out of his window while feeding some cats.

Afraid that the snake would pose a threat to his fellow residents, the resident – known only as Mr Chen – ran down and threw an object at the reptile.

This was when the python climbed the lamp post, where it stayed.

Mr Chen notified the town council, which is believed to have contacted pest control and the police.

Acres’ deputy chief executive officer, Mr Kalai Vanan confirmed to reporters that Acres did not rescue the snake and that the “handling of the snake in the video is incorrect.” He added:

“These snakes are part of our native fauna and should be handled properly. I hope the poor python did not suffer any injuries from the fall or from being mishandled.”

Mr Kalai Vanan appealed for anyone who spots a snake to call the Acres’ hotline at 9783 7782 instead of pest control.

https://theindependent.sg.sg/two-women-gain-widespread-praise-for-their-bravery-in-extricating-two-pythons-around-singapore/Follow us on Social Media