When pictures of the PM in the park wearing socks with holes in them went viral, netizens responded mostly positively saying it showed his humility and simplicity 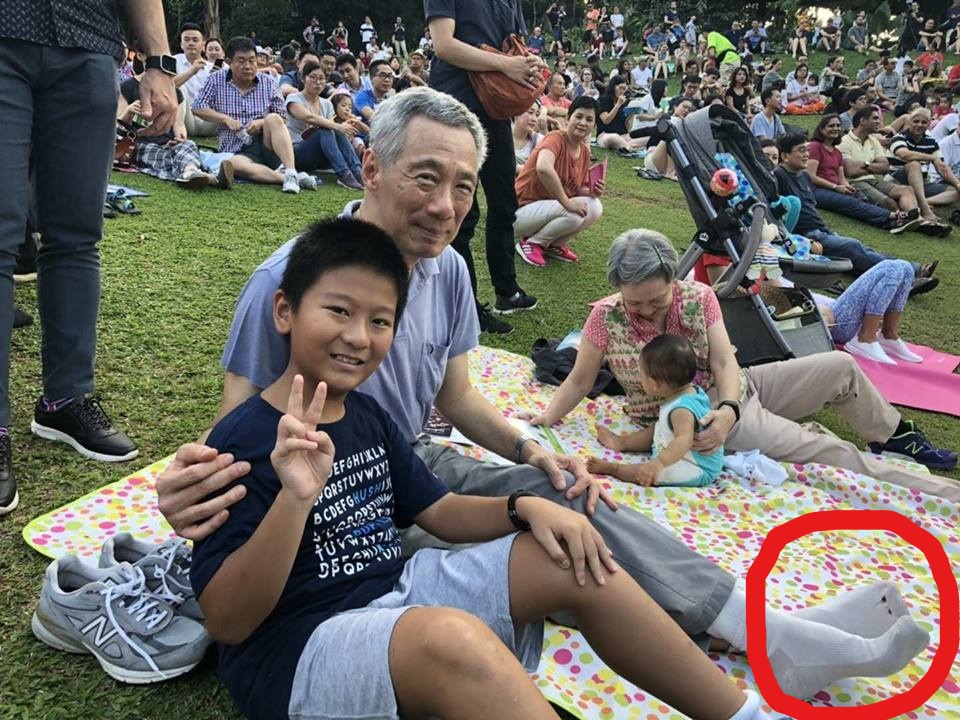 Photos of Prime Minister Lee Hsien Loong enjoying a picnic at the Botanic Gardens with his wife, Ho Ching, and his young granddaughter won praise online.

An eyewitness who shared the viral pictures of of PM Lee and Ho – who serves as the head of Singapore sovereign wealth fund, Temasek – playing with their infant grandchild on social media, noted that the PM Lee behaved like a typical grandfather.

She also wrote that there was no big security detail and that the Prime Minister and his family had not been given VIP seating, but had joined the rest of the audience.

Another Botanic Gardens visitor who had gotten the chance to meet the national leader at the park pointed out that PM Lee, who had removed his shoes, was wearing socks with holes on them.

Calling the sight “really incredible” and expressing hope that “the days ahead won’t be stressful anymore” presumably for the national leader, Victoria Li shared this picture on social media:

Netizens responding to the picture asserted that PM Lee’s socks prove his simplicity and humility. When one netizen snarkily said that Ho Ching should have mended PM Lee’s socks, others shot back that there is nothing wrong with wearing socks with holes in them and that Ho Ching is a “strong woman” who does not need to do such chores:

The revelation that PM Lee wears socks with holes, like many Singaporeans who may not be able to afford new socks, comes as he continues to draw a hefty S$2.2 million salary as Prime Minister.

In fact, the Prime Minister’s annual salary has grown significantly since Singapore gained independence in 1965 and has jumped from $42,000 to $2.2 million within 50 years.

In 1965, PM Lee’s father and Singapore’s founding Prime Minister – the late Lee Kuan Yew who was then known as the Chief Minister – earned a monthly fixed salary of S$3,500. This means that he was paid $42,000 annually.

In 1973, the Prime Minister’s salary was bumped up to a monthly sum of S$9,500 while other ministers started to earn S$7,000 – nearly double the S$4,500 they used to earn – following a ministerial salary review.

Ten years after the ministerial salary framework was released, Lee Hsien Loong took over the reins of the nation from his father’s successor, now-Emeritus Senior Minister Goh Chok Tong. In 2007, Lee Hsien Loong’s annual salary climbed to a whopping S$3,090,000 under this framework.

The Government accepted the committee’s proposal. Prime Minister Lee Hsien Loong’s annual salary was slashed to S$2.2 million, where it has remained for the last six years.

Despite the fact that PM Lee’s pay has not increased over the past six years, he still remains one of the highest paid political leaders in the world.Follow us on Social Media