The Independent Singapore News
International Business & Economy PM Lee Hsien Loong on economic upgrading and restructuring: “We have the...

PM Lee Hsien Loong on economic upgrading and restructuring: “We have the resources, the plans and the resolve”, but S’poreans doubt

The need for economic upgrading and restructuring has become a national issue that affect every Singaporean. Hence, PM Lee Hsien Loong wanted Singaporeans to have confidence, assuring that “We have the resources, the plans, and the resolve.”

“We will help everybody to get through any difficult times. We will help you, walk together with you to overcome these troubles,” PM Lee added.

“The changes Singapore faces are unavoidable, but the way forward is to become more productive, do better jobs and earn better pay.”

“In Singapore, we have spent a lot of time to put in place quite comprehensive procedures, and already have some experience. So Singaporeans should have confidence.”

The prime minister visited the Careers Connect facility of Workforce Singapore in Paya Lebar for the first time. This is where job seekers can meet career coaches and access career resources. 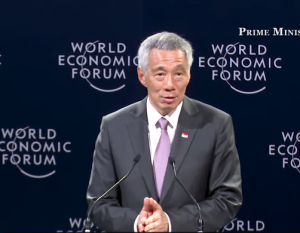 In an interview, PM Lee maintained that he was visiting the facility in order to see first hand the work being done to help people transition to new jobs, and meet people affected by the transformation as well as those helping them through it.

He was able to speak with former jobseekers and their career coaches. “I am very happy to see the enthusiasm here, and that they are seeing some results,” he remarked.

He highlighted the Adapt and Grow initiative, which helped those who were affected by the economic slowdown and restructuring, stating there were 30,000 job placements last year, a rise from 25,000 the year before.

“If you get the help and if you make the effort, well you can navigate the journey and improve your life,” he believed.

PM Lee described the country’s economy as not just expanding but also is upgrading and improving. It is doing well and productivity has been high, he added.

He then stressed on uneven gains government is collecting by contrasting the export-oriented sectors that are upgrading rapidly to stay competitive to that of the domestic services, which are moving slower.

The domestic sector is the backbone of the bulk of Singapore workforce for many of the employer-companies are local enterprises.

“We want to make sure that we have programmes to reach them and can upgrade them and the workers in them,” said PM Lee, emphasizing the sector’s need for support.

For example, the introduction of Lean Enterprise Development Scheme in 2015, which helps companies reduce their reliance on foreign manpower, adopt manpower-lean initiatives and drive business growth through the adoption of technology.

He believed that the journey is not easy, and many people are anxious and may worry about their career prospects, job security, and families. Older people, especially, may be more worried about new technology.

“The journey is not yet over.” Trying to be visionary, PM Lee said: “I don’t think we’ll ever be done. Ten years from now, I’m sure we’ll still be talking about productivity growth and upgrading, but 10 years from now, if we do our work right, we’ll be in a stronger position than we are today.”

Forbes, as of December 2018, ranked Singapore as number 8 in the best countries for business.

The assurance statements PM Lee Hsien Long had uttered were not able to hit the trust and confidence of the Singaporeans, as many netizens were critical about it. It seems netizens were not confident and did not trust the words of the highest leader of the Republic.

Some online users also stated their cynicism by being particular and specific.