A petition calling for Lee Hsien Yang and Lee Wei Ling to testify in court and defend the Chief Editor of The Online Citizen in a suit against their brother Prime Minister Lee Hsien Loong has been circulating.

PM Lee is suing The Online Citizen’s (TOC) chief editor Terry Xu for defamation. His lawyers say that the article and Facebook post by TOC contained “false and baseless” allegations, including that the PM had misled his father, the late Mr Lee Kuan Yew, into thinking the government had gazetted their Oxley Road home.

Prime Minister Lee Hsien Loong’s lawyers state that the article published by TOC on Aug 15 has “gravely injured” his character and reputation.

The petition, started by one Lim Jun Hao suggests that since PM Lee is suing Terry Xu, he will likely testify in court, therefore, both PM Lee’s siblings, Lee Hsien Yang and Lee Wei Ling, ought to show up in court too to provide their statement on the alleged defamation brought before Terry Xu. 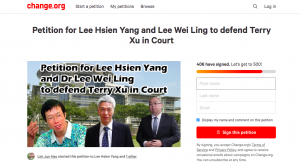 Lim laid out five reasons as to why he though both the younger Lee siblings should appear in court to testify.

These include that, “The Oxley Road house is not a matter of private individuals. It is a matter of national interest to be decided on by Singaporeans. The issues surrounding the late Lee Kuan Yew’s last will and testament must be clarified, or it will forever be a grey stain on Singapore’s history. This is not an ordinary family – the work of this family impacts the lives of Singaporeans past, present and future and these very Singaporeans in turn have a right to truth, justice and clarity”.

Lim also said that “Terry Xu should not be thrown into the deep end on his own” as he was merely repeating allegations made by Lee Hsien Yang and Lee Wei Ling.

“The allegations made by the Lee siblings have been muddled, unclear and ambiguous to the average reader. The courts can certainly help to shed clarity on the matter but it would not be possible if all the Lees were not present to answer to questions raised by the court”, Lim also wrote.

The petition was started approximately three weeks ago, with 419 signatures at the time of writing.

Many who signed the petition said that it was because they wanted the matter to be cleared up, and for the truth to be made known.