Singapore — On Monday (June 1), the ruling People’s Action Party (PAP) changed the cover photo on its Facebook page to one of the city’s skyline, along with a collage of photos of Singaporeans. It read: “Singapore United, Singapore Together. With You, For You, For Singapore.”

The party’s previous cover photo, with a message relevant to the Covid-19 pandemic, had been uploaded on April 15. The photo was of a person wearing white, hands outstretched, and with the words “Stay Safe, Stay United. With You, For You, For Singapore.”

#SGUnited and #SingaporeTogether are commonly-used hashtags by PAP leaders such as Prime Minister Lee Hsien Loong and Deputy Prime Minister Heng Swee Keat in their social media posts. And with the shifting from the home in the previous cover photo to the city in the current one, it would seem that the party may be moving some emphasis from the health and safety front to the political one.

While many of those commenting on the Facebook page appreciated the beauty of the new cover photo, others took it as a signal of the coming General Election, which must be held before April 14 next year. 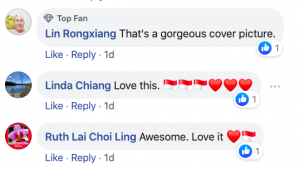 One person said that now everyone should know that the Phase 1 easing of the circuit breaker was for a General Election.

The activist page Wake Up, Singapore shared the picture as well.

Some of those who commented on the post said that, the sooner the elections are held, the better.

The share on the Wake Up, Singapore page led to many commenting on who they will or will not vote for.

Some wrote they will be voting for the opposition, even though they believe that the ruling party will still win many seats in Parliament.

Others expressed the hope that, even if the PAP stays as the majority party, more opposition figures will win.

Others brought up issues that matter to them, such as the large number of foreign workers and the Goods and Services Tax (GST).

One person, on the kind of leadership he would like to see in Singapore, commented with a quote from the late American Christian minister and activist Martin Luther King Jr.