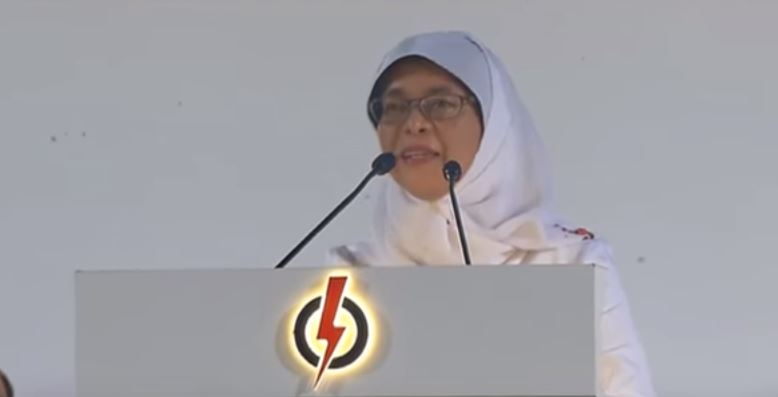 Member of Parliament from the People’s Action Party, Zainal Sapari, has vouched for the ‘Malayness’ of the Speaker of Parliament. This publication reported yesterday that Speaker of Parliament, Mdm Halimah Yacob’s Wikipedia page appears to have been edited recently, and that her page now does not show that she is a “Singaporean politician of Indian descent” as it previously did. The last edit on Mdm Halimah’s Wikipedia page was on 18 July 2017, and it has since been made a ‘protected page’ to guard against vandalism.

Mr Zainal, a PAP MP has now vouched for the ‘Malayness’ of the Speaker of Parliament. Sharing an article which said that Mdm Halimah contested in 3 General Elections as a ‘Malay’ minority candidate in his Facebook, Mr Zainal said that to him, “beyond any reasonable doubt, she belongs to (the) Malay Community.”

Mdm Halimah recently confirmed that she is eyeing the Elected Presidency. Speaking after a community event in her Marsiling-Yew Tee GRC, Mdm Halimah said:

“I am thinking about it, of running for the presidency…The elected presidency is a very heavy responsibility and an important institution in Singapore, so it’s not something that one should take lightly… so it needs a bit of time to think. But I must say at this moment, I have a lot of duties I have to perform, as Speaker, as MP. These duties are also very dear and important to me.”

At the parliamentary debate on the Presidential Election (amendment) Bill in February, Minister in the Prime Minister’s Office, Chan Chun Sing, accidentally referred to Madam Halimah as “Madam President” instead of “Madam Speaker”. Netizens who responded to Mr Chan’s slip then, wondered if it was a freudian one.

In April of this year, it was reported that a People’s Action Party (PAP) member who was abruptly asked to step down as Grassroots Adviser in Aljunied GRC just weeks before the 2015 General Election (GE) has been helping Marsiling-Yew Tee GRC Member of Parliament Halimah Yacob at her Meet-the-People Session (MPS) for more than a year.

The former Adviser of Kaki Bukit division in Aljunied GRC, Kahar Hassan, was dropped from the PAP team which went on to contest in the GE amidst rumours that he was “hardworking” but perhaps did not build up rapport with his residents.Follow us on Social Media