Singapore—The country’s Education Minister weighed in on a recent bullying incident of a Primary 5 student, mincing no words in calling out the wrong that had been done to the young girl and assuring the public that appropriate action would be taken against the school if such incidents occurred.

Ong Ye Kung took to Facebook on Tuesday night (March 10) to comment on the incident, which had occurred at Mee Toh School. He focused on the racist aspect of the bullying incident. “It does not matter whether the students might have done it out of mischief or that they are only Primary 5 students; the fact is that the victim felt that it was a racist act, and that makes it even more unacceptable.”

I was dismayed and troubled when I read about the bullying case at Mee Toh School. A group of students had picked on…

The public first came to learn about the bullying when a netizen, who goes by @4YSLZ, posted about it on Twitter on March 6.  She said that it had been her younger sister’s birthday, but one of her sister’s classmates had thrown pieces of paper in her face, with insulting messages. This broke her heart, especially since it was not the first time to happen. The young girl, she wrote, had “come home w her uniform vandalised w markers, being called names & cyber bullied.”

my heart broke today, it was my sister’s birthday yesterday & one of her classmates threw this to her face as “birthday present”. this is not the first time she has been bullied, she ever came home w her uniform vandalised w markers, being called names & cyber bullied. pic.twitter.com/szIlIcBIIX

On the pieces of paper thrown at the young girl messages such as “you are dumbo the elephant” and “you look so ugly and you really turn me down you make puke” were written.

The child who had done this is only 11 years old.

@4YSLZ went on to write that her sister has been the target of racist remarks over the years. “My sister goes to a buddhist school (its the nearest pri sch to my house & my other sis went to the same sch so its easier for her to get in) theres only a handful of malays in the school & the amount of racists remarks my sisters has received thru out the years, i’m sick of it.” (sic)

She added that she has reached out to the school as well as to the Ministry of Education to tell them about the bullying but had gotten no results. And the one time that her sister stood up to the bullies, their parents got called in by the school and the sister was made to publicly apologize.

I’ve emailed the school, turned up for her parent teacher conference to confront her teachers about this, i’ve emailed MOE too. But what have they done? Nothing. This keeps happening & i’m sick of seeing my sisters cry

@4YSLZ wrote, “where this energy at when falisya was the one being bullied?” In a later tweet, she identified the school, writing that it is in Punggol. She added later that their mother asked the teacher to move the sister to another class, only to be told this could not be done but that they could move the girl to another school. 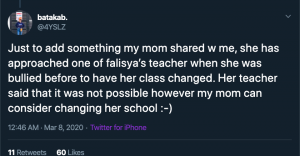 The Education Minister wrote that he is “dismayed and troubled” by the bullying incident, writing that “it goes against some very fundamental values of what we stand for as a society.”

Mr Ong ended his post by saying that the school would make sure the students involved would “understand the seriousness of their actions” and that disciplinary action would be taken. —/TISG