The Nanyang Technological University’s (NTU) Japanese Appreciation Club has drawn flak for hosting a Japanese Cultural Festival, which was touted to be the student club’s biggest event, on 18 Feb – the same date that saw the horrific Sook Ching massacre unfold, 77 years ago.

The Sook Ching massacre was a systematic purge of perceived hostile elements among the Chinese in Singapore by the Japanese military during the Japanese occupation of Singapore and Malaya. The operation was overseen by the Imperial Japanese Army’s Kenpeitai secret police.

The devastating genocide, which took place from 18 February to 4 March 1942 at various places in the region, occurred a mere three days after the British colony surrendered on 15 February 1942 following the Battle of Singapore.

Thousands of Singaporeans died in the purge. While Japan officially said that fewer than 5,000 deaths occurred, Singapore’s founding Prime Minister Lee Kuan Yew has said that “verifiable numbers would be about 70,000”.

In 1966, Japan agreed to pay US$50 million in compensation, half of which was a grant and the rest as a loan. They did not make an official apology.

This year, NTU’s Japanese Appreciation Club hosted their annual Japanese Cultural Festival on Monday, 18 Feb, which would be the 77th anniversary of the Sook Ching massacre. The event was held at NTU’s Canopy Stage, between 10am and 7pm.

The student club revealed that the event “features collaborations with organisations promoting Japan and Japanese culture,” on their Facebook page. Admission was free and the event was open to the public. Sharing a picture of the event invitation on Facebook, netizen Angeline Lee criticised the students for their ignorance in holding the appreciation event on the same date as the Sook Ching massacre. She wrote:

“This event says a lot about our students’ lack of knowledge and appreciation about the significant events in our country’s history.

“18 February 1942 The Kempeitai started Sook Ching – the massacre of the Chinese population after the fall of Singapore. And NTU students plan for a Japanese cultural day on 18 February.”

In a comment, Lee shared a moving story the grandson of a Sook Ching massacre survivor shared with her:

“A story shared by my friend James Chow about how his grandfather escaped the massacre:

“”18 February 1942 was the day of Operation Sook Ching 肅清 carried out by the Japanese Hojo Kempei – this is the massacre of the local Chinese population after the fall of Singapore.

“Oral history from my mother: “The Kempeitai soldiers came to Geylang Lorong 19 and arrested every adult male in the families who lived along the stretch of households. And her father, who was at home that time at house Nº 156, was one of those men rounded up.

“All of those Chinese men were sent to Changi Beach where their imminent fate awaits them. They would be made to queue and numbered off into 1, 2 and 3. These numbered men would be called in turns to line up along the beach front and ordered to dig a large hole. After they have finished digging their own graves, the firing squad would open fire from their rifles and carry out the execution in an orderly manner.

“So when my grandfather 公公 was in the queue and being numbered off by the Malay men (who were forced to assist the Japanese soldiers), one of the Malay man who was a villager from the Kampung neighbour to Geylang Lorong 19 recognized my 公公. He immediately spoke to my 公公: “Encik, quick wear this & follow me at once.”, and swiftly put a songkok melayu on my 公公’s head and led him out of the queue to escape from that execution area.

“My grandfather 公公, wearing that songkok melayu, walked all the way from Changi back to his home at Geylang Lorong 19. He was the only Head of the Household adult-male-Chinese from that stretch of Lorong 19 who returned alive from the Sook Ching 肅清 massacre.”

“Remember & Learn From Your True History.” Netizens responding to Lee’s post criticised the NTU students club and expressed surprise that the students are so clueless about a major historical event that occurred on that date.

Netizens also criticised the school’s administration since it must have approved the event to be held on the notable date: 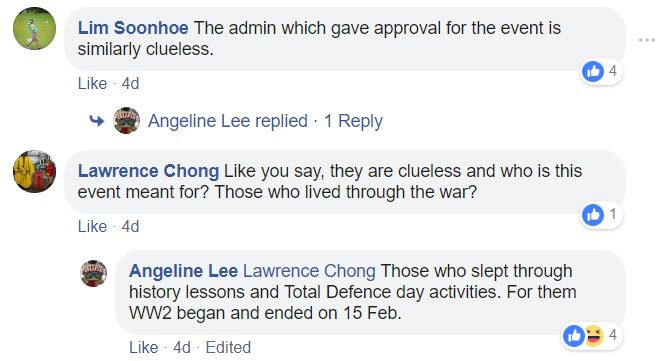 Singapore – A family in Singapore went through a troubling experience after their tempered glass sliding door shattered suddenly during the last day of Chinese New Year. On Thursday (March 4), one Eldora Lie took to Facebook to share the footage from...
View Post
Featured News

I just saw a news clip in the Today newspaper, which said that Mr Louise Ng, the Member of Parliament (MP) for Nee Soon Group Representation Constituency (GRC), was being investigated by the police for holding up a “smiley face”, encouraging...
View Post