Reacting to the report, netizens zeroed in on the fact that the first complaint of the woman who called the police had gone unheeded.

Singapore — Many netizens were unhappy with the news that police did not respond to complaints that a massage parlour was operating during the Circuit Breaker last year, with some warning that the next possible Covid-19 cluster could come from such an establishment.

On Wednesday (Jul 21), it was reported that an 81-year-old man who runs a massage parlour had been given a fine of S$18,000 after pleading guilty to two charges.

Too Seng San had operated Tai Kang Yang Seng TCM Therapy at Block 201, Hougang Street 21 during last year’s CB at a time when he did not have a valid license to do so.

Moreover, he did not stop one of his employees from offering sexual services to a client.

Too’s violations had been discovered after someone had complained to the police on Apr 17, 2020.

According to CNA, the woman who called the police said, “This is my second and third time calling already. I believe that this massage parlour is operating despite the circuit breaker period. I saw (a) few customers … coming in and out of the shop through the rear entrance. Can send police now.”

When the police arrived, they found a male customer together with four masseuses, which led to the charges against Too.

It was the second time that he had been convicted for a similar offence.

Reacting to the report, netizens zeroed in on the fact that the first complaint of the woman who called the police had gone unheeded.

“What caught my attention – she called 2 to 3 times,” a netizen wrote.

Another wondered why the massage parlour was not closed down, given that the services it offers require close contact.

Some drew similarities between massage parlours and KTV lounges, which have recently been in the news due to Covid infection clusters. 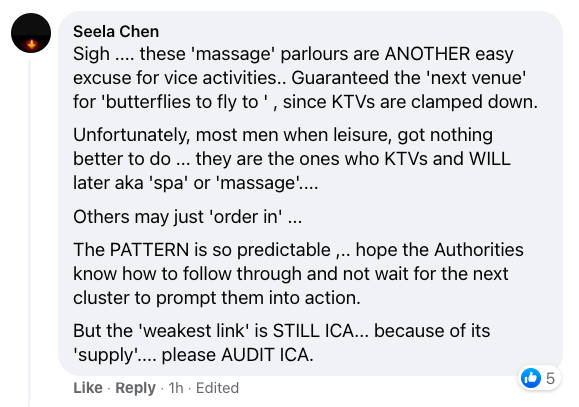 One warned that the next infection cluster could be sparked at such an establishment.

Others wondered if the 81-year-old Too was merely a “fall guy” or scapegoat in the whole incident. Given his advanced age, the punishment he receives is not likely to be severe. 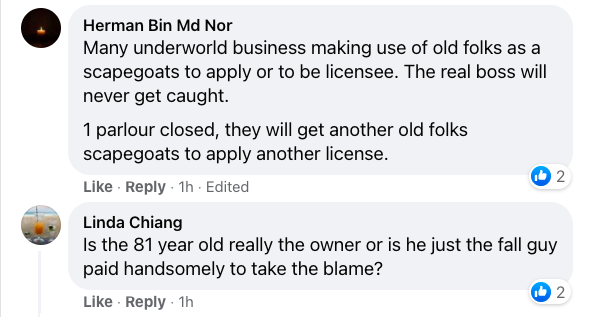