Not enough space in morgue for bodies, cremation services in short supply Kuala Lumpur—An online news site in Malaysia claims that the backlog in managing the bodies of individuals who have died of Covid-19 is a “sure sign” of the “gross mismanagement” of the pandemic by the administration of Prime Minister Muhyiddin Yassin.

A headline in the June 9 edition of the Malaysia Chronicle also says that “Doctors, forced into playing God, (are) dreading each day as it comes.” 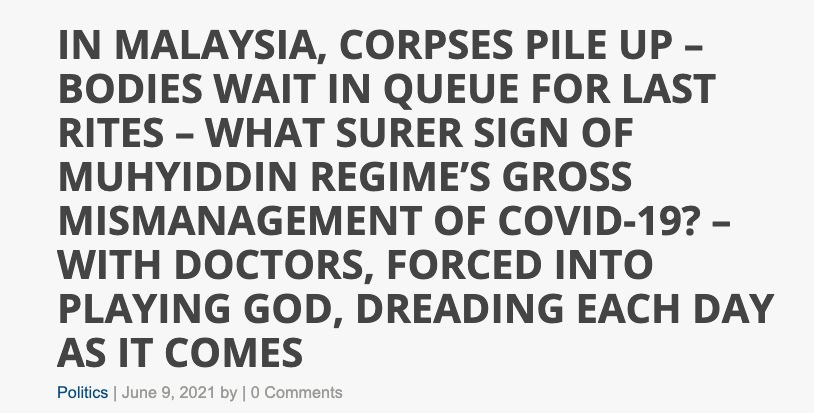 The actual news article under the headline was put out by the Malaysian National News Agency Bernama on Wednesday morning (June 9) and had been published in the New Straits Times, The Star, and Malaysiakini, but without the Malaysia Chronicle headline. The news simply appeared under the headline: “As Covid-19 death toll rises in Malaysia, bodies wait in queue for last rites.”

Bernama said that the growing number of Covid-19 fatalities in Malaysia has caused the National Institute of Forensic Medicine (IPFN) “to face a bitter situation” due to the backlog in managing the bodies of those who have died from Covid and other causes.

The piece quoted Dr Salmah Arshad, a forensic pathologist at Kuala Lumpur Hospital (HKL), as saying that there is not enough space in the IPFN morgue for bodies of the deceased, and Covid victims have been placed in temporary containers serving as makeshift morgues.

Cremation services are also in short supply, and Dr Salmah said that Covid victims have to wait their turn as non-Covid victims are also accommodated in crematoriums.

“What worries me now is the deaths outside the hospital, which have not been treated. The symptoms are too rapid and this is depressing.

“Indeed, there have been changes. In the past, we expected deaths involving elderly patients, and diseases such as heart, kidney and obesity. In the first wave, those were the factors that contributed to the risk of death last year.”

The forensic pathologist added that this third wave is unpredictable as it now involves both young and older people.

“The youngest we received who died at home was in their 20s and had no illness. Now everyone has to be careful and follow the standard operating procedures (SOPs), because everyone can be exposed and die because of Covid-19.”

Bernama added that Dr Salmah did not rule out the possibility that Covid variants could be responsible for these changes.