Yumeno Asahina explained that after cutting the bra in half and removing the back strap, one shoulder strap is removed and sewn onto one cup so that it can be hooked behind the ears

Tokyo – There has been a shortage of face masks across numerous countries due to the Covid-19 outbreak, which began early this year. Undergarments have been a popular choice for makeshift mask alternatives, such as briefs and now brassieres.

Yumeno Asahina, a Japanese model, recently took to Twitter to provide a tutorial on how to turn an old bra into a face mask. “I made a mask with a bra that I no longer use,” wrote the model in the caption. She added that all she needed was a needle and thread to make the innovative mask.

She also included a step-by-step illustration for those who want to give it a try. After cutting the bra in half and removing the back strap, one shoulder strap is removed and sewn onto one cup so that it can be hooked behind the ears.

The mask looked quite snug on Ms Yumeno, although it is still unclear if the makeshift mask would be effective in filtering out Covid-19 droplets.

Netizens were quite impressed with the post and commented that it was not too difficult to make, based on her tutorial. Those who don’t use brassieres replied that they would have to buy one soon.

Others asked if non-wire and seamless bras would work too while some asked Ms Yumeno to sell the masks because they “would definitely purchase” it.

Meanwhile, another netizen suggested that brands like Wacoal and Triumph pick up the idea, alter production a bit, and possibly help in the mask shortage.

Makeshift masks are encouraged by local governments in Japan as it continues its fight against the virus outbreak.

Oita Prefecture, for example, has posted on its website methods for creating do-it-yourself face masks using gauze fabric and elastic bands which residents could replicate. The instructions have been provided in multiple languages. The English version reads: 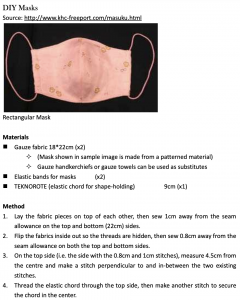 Materials for the DIY masks could be easily purchased at 100-yen shops.

Other prefectures have released tutorials on how to make disinfectants using diluted chlorine bleach and water which could be used to sanitise doorknobs, tables and other household items.

To date, Japan has a total of 1,226 confirmed cases of Covid-19, 696 from the Diamond Princess cruise ship.