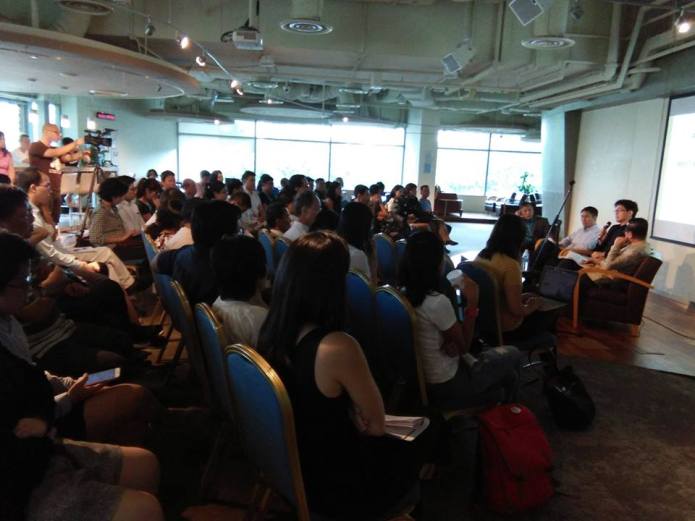 On 30 July, Community Action Network (CAN) was invited to speak at an event “Protecting our judiciary and free speech” at the Singapore Management University. The following is an excerpt of the speech given by CAN representative, Jolovan Wham, at the event.

—
In the last 5 years, the government has clamped down on freedom of expression in ways which we have not seen since pre GE (General Elections) 2011. This is no doubt due to the government’s perceived threats of the influence of social media. In the cases where it has relied on case law to deal with contempt of court, it has been arbitrary in how it decided what it was, and what scandalising the judiciary meant. This proposed Bill in our view, codifies this arbitrariness even though it claims it seeks to clarify it.

In April 2013 the police arrested and interrogated Leslie Chew, a cartoonist, and detained him for two days for publishing works which the authorities deemed seditious and which the government said “scandalises our Courts through allegations and imputations that are scurrilous and false”. The threatened contempt of court charges were only withdrawn after Chew made a public apology and deleted four cartoons.

Filmmaker Lynn Lee was documenting the first strike in Singapore in 26 years involving a group of bus drivers from China who were working for the Singapore Mass Rapid Transit (SMRT). The strike was deemed illegal and five men were charged for instigating it. During Lynn’s interviews with them, two of them alleged police brutality while in custody. Lynn released the two short videos describing the assault on her blog in January 2013. A week later, the police took her in for questioning and confiscated her mobile phone, laptop, iMac and hard drive. The Attorney General’s Chamber gave her a letter of warning for contempt of court.

Civil society groups and activists were accused by the government of casting aspersions on the integrity of the police and the government even though we were telling the stories of the accused drivers solely from their point of view and calling for transparency in how the investigations were conducted. One of the calls we made was for sound and video recordings of police interrogations to be used so that any allegations of police abuse could be verified. The government said that it had investigated and did not find any wrongdoing on the part of the police. But the investigations were done by the internal affairs office, which is a department under the Ministry of Home Affairs. It is not independent at all.

Court proceedings as defined by the proposed bill commences when the issue of a notice to attend court to answer a charge is given, when summons are issued for a person to appear before a judge, or any other process to compel the attendance of the person to answer a charge of the offence. This means that you run the risk of committing a contempt of court offence even when you make comments when the police or other authorities start investigations against a person. This was exactly what happened in Lynn Lee’s case. She had released those videos before the workers had appeared in court. But what Lynn Lee did wasn’t even a commentary. She merely broadcast what the bus drivers said had happened to them while they were in police custody.

When Community Action Network launched a campaign to free Amos Yee last year, we started a petition which gathered a few thousand signatures, we organised a HLP event which attracted approx. 200 people denouncing the charges and even publicised a complaint we filed to the UN Special Rapporteur on freedom of expression. But the government did not take any action. We were not hauled up on any charges. Why didn’t they do so? How did they decide that Lynn Lee and Leslie Chew committed an offence whereas members of Community Action Network didn’t? This new Bill does not shed any light on this. It leaves too much room for interpretation. The Bill says you are in contempt of court if what you say or do has a “real risk of prejudice” to the outcome of the case. You are also in contempt if your “motives” are found to be “improper” But what does all this really mean in practice?

The Bill also allows the police to arrest and detain you. This is disproportionate, considering that the offender has not caused any harm to society, in the way that a robber, shoplifter, murderer or cheat has.

How the law will be applied was explained in a Channel News Asia (CNA) article quoting the law minister. It’s quite clear it is targeted at socio-political websites, activists and those with a significant following on social media.

Said the Law Minister: “Let’s say your son has been killed by someone, or you believe your son has been killed by someone. That person is facing charges. You say in anguish that ‘This person is a murderer, and that he has killed my son and he ought to hang.’ Now strictly speaking. that’s contempt, but I think it will be unlikely that any attorney-general will prosecute such a person. People will give some latitude.”

“At the same time, let’s say a national newspaper or somebody with a broad reach starts a campaign to say that so and so should be found guilty, and he should hang, and mobilises public opinion in a significant way. You can see that there is a difference between the two. I’m sure the attorney-general will act in the second case,” he added.

This new law will end up stifling civil society advocates, many of whom base their campaigns on injustices suffered by vulnerable individuals. How can we as social change makers even launch our campaigns, start the process of reform when such a blunt instrument hangs over our heads? Anti-death penalty activists, who base their advocacy on court cases will not be able to speak up against the death penalty or the administration of justice. When someone’s life is on the line, when the death penalty is irreversible, it is a moral imperative for many of us to do whatever it takes to save this person. We’ll no longer be able to do that. Comments on the case can only be expressed when the case has concluded, and this includes when all avenues of appeal to the higher courts have concluded. This could take months and even years for some cases. By then, interest in the case would have died down.

Defenders of the Bill will say that Part 4 of the Bill allows for defences to contempt. As long as the comments published are “fair and accurate” and in “good faith” an individual will not be said to be in contempt. But what exactly is fairness? What is good faith? When Lynn Lee posted the videos of the SMRT drivers who were assaulted under police custody, she did it in good faith that justice would be served and Singaporeans would be educated about the injustices experienced by vulnerable migrants, and that something could be done about police abuse. Would this be acceptable to the government? Advocates do not base their campaigns on an opposing party’s arguments and points of view. And how is fairness defined? And can it apply in situations when campaigns are launched? When I campaign for a person on death row, I can’t possibly trot out arguments why he deserves to die, in order to present a more “balanced point of view”? How ridiculous is this? If laws are unjust to begin with, how can we campaign against them with the operation of this proposed Bill?

Even in part 4 of the Bill where it codifies acceptable defences to contempt, the language is vague and unhelpful. As long as the opinion is published “in good faith”, “fair and accurate report of the proceedings”

In the Benjamin Lim case, for instance,The Online Citizen (TOC) published close to 20 articles documenting opinions and facts from various sources in these articles. According to TOC, it tried to get responses from the police to verify and clarify the information it obtained but there was no answer. How does one write a “fair and accurate report” in the absence of the State’s response?

As for the mainstream media’s coverage of SMRT strike, was there not a real risk of prejudice when they called the workers “illegal strikers” when they had not even been convicted in court? How was the coverage of the case “fair and accurate” when many of the articles already prejudged the case and made the drivers look like criminals?

When the strike happened, even before the workers were formally charged, the government and politicians were issuing statements saying that the workers were wrong to have taken industrial action and that they should have gone through proper channels to address their grievances. How was this not prejudging and prejudicing the case?

Another area of concern is in the government’s jurisdiction over publications outside of Singapore. Paragraph 11 of the Act states:

This means that even if you don’t publish the offending the article, but it was published by someone else in another country, you could be in contempt of court simply by sharing an article on facebook and twitter.

In cases where allegations of corruption are made against the judiciary, or in a hypothetical situation, a campaign is launched against the judiciary that it is corrupt and rotten to the core, I don’t think public confidence is placated by prosecuting the person making these allegations; coming down hard on the offender might even be seen as attempts to conceal a wrong doing. False allegations can always be countered by producing facts and evidence or asking for those making the allegations to substantiate their claims. Moreover, a prosecution gives further publicity by bringing them back to public attention, and this ultimately is self-defeating.

The coverage of the law is very wide and it gives the government too much discretion to decide who to prosecute. Self-censorship is one of the most pernicious characteristics of Singapore society and this proposed Bill will entrench it even further.

—
Republished from CAN’s website.Follow us on Social Media