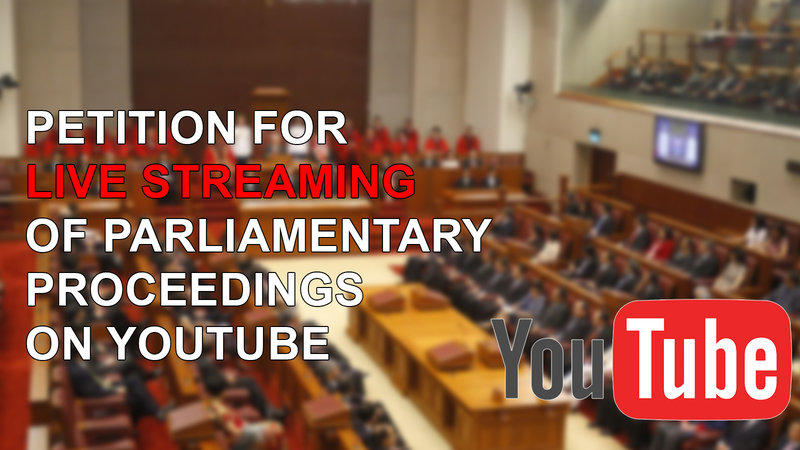 Netizens have rebutted Senior Minister of State for Health and Communications and Information, Chee Hong Tat’s remark last week that “the reason why we (parliament) don’t have a live feed is because this is not in great demand” by launching an online petition for the government to initiate live video feed of parliamentary sessions in the interests of transparency and accountability.

The petition was initiated by netizen Chee Hong Lau and will be delivered to the Parliament of Singapore and the Workers’ Party’s NCMP Leon Perera, who brought up the issue of live video feed of parliamentary sessions in the House last week.

Gunning for 200 signatories, the petition has garnered about half the target in four days. Signatories who have backed the petition have asserted that they have a right to know what’s going on in the House as their reason for signing the petition:

Lin Yihui Sharon: It is important for the government to be transparent and accountable to the people. It is important to see the participatory performance of million-dollar salaries ministers doing their job.

Carl Lang: It’s my right to know what’s going on in my country!

Leelavathi Singaram: Transparency is badly needed in our governance.

Nunthini Sivalingam: We are supposed to be a democracy. I have a right to know what’s going on.

Corinna Liang: We need to be concerned n know what and how is being debated in the parliament. Why should we give blanks to unscrupulous people to decide our fate!

David Ong: We are living in 21st century now? Still can afford live telecast for our parliamentary debate? What was “no demand” our minister was referring to as we are not talking about buying and selling here? Really rubbish reply indeed.

https://theindependent.sg.sg/ridiculous-chee-perera-debate-proves-perera-was-right-on-parliament-footage/Follow us on Social Media