Singapore—Marshall Cavendish Education, the publisher of a children’s book recently removed by the National Library Board (NLB) for its allegedly racist content, issued a statement of apology on July 21” for any misunderstanding caused to some readers.” The publisher also said it would stop the sale and distribution of the book, as well as retrieve copies of it from stores.

Netizen Umm Yusof took to Facebook to write about a book from the NLB entitled Who Wins? (谁赢了), written by Wu Xing Hua (吴星华) and published by Marshall Cavendish Education in 2018. She complained that the antagonist in the book was “described in explicitly racialised terms, in contrast to all the other characters who are depicted as fair-skinned.”

On Racial Harmony Day, ironically, I borrowed an astoundingly racist local book from the National Library Board,…

The dark-skinned Mao-Mao is an aggressive bully who gives the protagonist, Pi Pi, a bloody nose, and is also described as “smelly.”

“Author basically channels the old-school Chinese parent threat of ‘Behave or the Ah Neh will get you’, with a dash of the ‘Oily Man’ and ‘smelly Indian’ bogeys thrown in.”

She then went on to tag the publisher, asking why it had released a book “in which the sole dark-skinned character is irredeemably nasty – especially when his appearance is irrelevant to the plot?,” and said she would ask the NLB to remove it from circulation.

On Sunday (July 19), the NLB confirmed that the board is reviewing the book, reported straitstimes.com. “This will be done in consultation with our Library Consultative Panel, which is an independent and citizen-based panel,” said an NLB representative. They have, since then, removed all copies of the book from the libraries while it is being reviewed.

After Ms Yusof’s post became widely shared, the publisher responded by and thanking her for bringing the matter to their attention and adding in a comment, “We appreciate any feedback given and will do our utmost to resolve the issue.”

Since then, the publisher put out a statement of apology but did not specifically mention the aspects of racism that Ms Yusof brought up.

[MCE PRESS RELEASE]ADVENTURES OF PI PI《谁赢了》 WHO WINS?The core of Marshall Cavendish Education’s mission is to…

“ADVENTURES OF PI PI《谁赢了》 WHO WINS?

We appreciate the feedback from some public members who have highlighted their perspectives. As a socially responsible publisher, we have decided to cease the sale and distribution of this series and recall the books from retail stores.

We would like to apologise for any misunderstanding caused to some readers. The books we publish cater to an all-inclusive society where diversity is respected and celebrated, and our team is dedicated and committed to that cause.

However, some netizens were less than satisfied with the publisher’s apology. 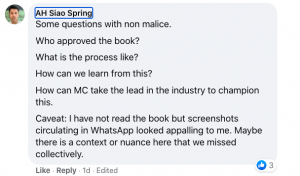