Netizens question whether new candidate Ivan Lim is fit to contest in the GE, but PAP stands by their man

While other candidates are receiving encouraging remarks from netizens, there have been warnings posted concerning Mr Lim’s character with more than one netizen urging that his background be looked into

Mr Lim is the General Manager for Specialised Vessels of Keppel Offshore & Marine. According to Mothership, Mr Lim “wants to help elderly residents and children who have disadvantages, people with special needs as well as parents who have to strike a balance between work and family,” and “would like to focus on digitalisation and transformation of businesses and workspaces.”

However, since his introduction, posts on social media have emerged, questioning whether or not Mr Lim is fit to be one of PAP’s candidates due to negative attitudes he displayed in the past.

The PAP posted video clips of the different new candidates from the virtual press conferences held over the past three days. And while other candidates are receiving encouraging remarks from netizens, there have been warnings posted concerning Mr Lim’s character.

More than one netizen has urged the party to look into Mr Lim’s background.

One commenter called him a “potential lightning rod for opposition votes.”

The Facebook page Temasek Review Daily posted a screenshot from a netizen named Bryant Wong Hai Chew, who wrote that Mr Lim had been the CO of his “ex-NS Combat Engineer Battalion.” 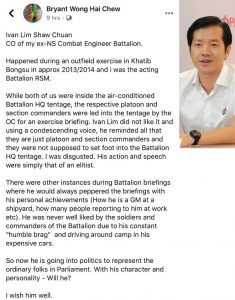 Another story from one of his former subordinates in NS came out in the page Sin Rak Sin Party. One netizen named Laxton Yeo, who said Mr Lim has been the OC of his battalion, left this comment on a video posted by Channel NewsAsia (CNA).

Another post from Temasek Review Daily also featured negative comments from people who claim to know Mr Lim. The post read, “From polytechnic classmate, national service camp-mates to coworkers at Keppel, no one seems to like the PAP new candidate Ivan Lim Shaw Chuan. At least we now know that Ivan’s snobbish, condescending and elitist attitude did not changed (sic) over the years which fits perfectly into the PAP.”

From polytechnic classmate, national service camp-mates to coworkers at Keppel, no one seems to like the PAP new…

It seems that the minister, and the party, is choosing to stand by the newcomer.

“General Election is a time when people who have been introduced will elicit responses, which is not surprising.

But I think that it’s also important for the candidates who may have been alleged to be something or other, to also prove themselves,” said Mr Masagos. -/TISG

Read also: Singaporeans answer if they’ll be voting for PAP in the upcoming GE