Netizens are outraged over Eight Riversuites condominium’s decision to replace their security team, even though the change reportedly does not have anything to do with the viral altercation between the condo’s former security team and a condo resident.

On 25 Oct, a video of a man verbally abusing a hapless security officer went viral on social media.The video showed a man hurling vulgarities at the elderly guard after being told that guests visiting his condominium needed to pay parking fees.

Despite the security guard’s explanation that he was simply enforcing the rules, the condo resident continued to berate the worker. In his expletive-ridden rant, the man bragged to the security officer that he bought his condominium unit for S$1.5 million. He exclaimed: “I buy your f****** property for S$1.5 million you know.”

Netizens subsequently identified the condo resident as Ramesh Erramalli, an India-born naturalised Singapore citizen who works at global financial services company JP Morgan in Singapore. Outraged over his treatment of the guards, tens of thousands of netizens called on JP Morgan to sack him and have him deported back to India.

The incident also drew the attention of ruling party politicians like Senior Minister Tharman Shanmugaratnam who condemned Ramesh’s behaviour. Ramesh, who initially complained about being harassed after the incident and filed a police report, eventually met with the guard and apologised for his rude behaviour.

About a week after the incident occurred, the Security Association Singapore (SAS) revealed that the security team at Eight Riversuites condominium had been replaced.

Clarifying that the change had nothing to do with the spat involving Ramesh, SAS executive director Ikhsan Suri told CNA: “SAS understands that the contract had been terminated prior to the incident and that it is unrelated to the incident.”

According to TODAY, the old security team was terminated a month ago with notice following complaints from residents about the performance of the old team of guards. In line with residents’ claims that the change has been in the works, Union of Security Employees president Ardi Amir told TODAY that the change was a scheduled one.

A new team from another security firm took over Eight Riversuites last Thursday (31 Oct). Mr Ardi Amir told TODAY that the old security team has been redeployed elsewhere and are still employed with their agency.

Despite these clarifications, netizens remain convinced that the replacement of security personnel has something to do with the viral altercation involving Ramesh given the timing of the change. Outraged over this latest turn of events, netizens expressed sympathy for the security officer and blasted the condominium management for making such a decision: 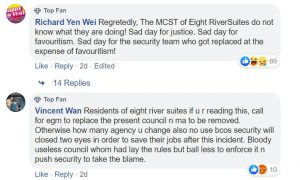 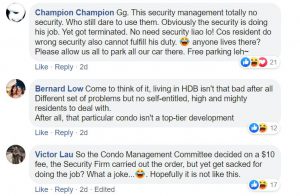 In a forum letter published by the Straits Times on 29 Oct, security supervisor Sivarajah Nathan said that the main problem security guards who encounter abuse face is “the condominium management”.

Pointing to the recent case in which a condo resident hurled vulgarities and berated hapless security guards who simply told the resident that his guests need to pay parking fees as per the condo rules, Mr Sivarajah said: “As a security supervisor, I have encountered such humiliation, had vulgarities hurled at me and even been issued threats to get me out of the workplace.”

Mr Sivarajah said that the main problem guards usually face, however, is the condo management. Noting that the management is “afraid of the residents,” he said:

“When an incident arises, instead of calling the resident and investigating the case, the management issues a warning letter to the security officer or even takes him out of the assignment.

“The condo managing agent is afraid to lose its job and takes the shortcut. Agencies that employ us do not bother to offer any assistance and simply transfer the security officer in an incident to another site. These agencies seem to want only to collect their monthly income from the Management Corporation Strata Title.”

Asking what is the purpose of the condo committee since council members “distance themselves” and do not assist when security guards are harassed, Mr Sivarajah said that the police also offer little help, often advising guards to bring up the matter to the condo management since altercations take place in private properties.