Home News Featured News Netizens on the social lives of maids and banglas: "Leave them alone!",...

Netizens on the social lives of maids and banglas: “Leave them alone!”, “Mind your own business!”

On the Facebook page All Singapore Stuff, a video entitled “Maids and Bangla Mixing It Up” was posted late Monday morning (September 10). The clip, which is a little more than a minute long, shows couples picnicking and seeming to behave rather intimately, reportedly at Kallang River.

The person who posted the video wrote that the couples are “maids and banglas,” a local term for foreign workers, which is at times used in a derogatory manner.

The poster asks, “Should we just leave the maids and banglas alone on their off days for their bit of fun under the sun? Apparently, this is a typical scene at Kallang River every Sunday, and the action at night gets even hotter. Should authorities get invovled?”

An hour after the video was posted it had gotten over 20,000 views, more than 200 shares, and many netizens decided to weigh in on the matter and answer the questions posted.

Almost everyone called out the person who took the video, telling them to leave the foreign workers and domestic helpers alone, to mind their own business. 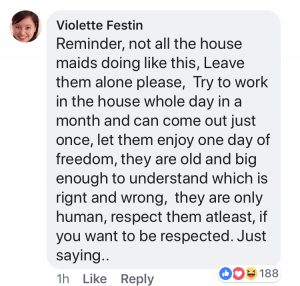 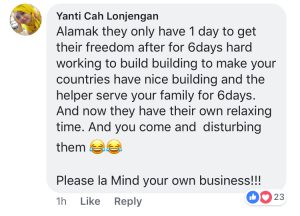 One netizen in particular called out the person who took the video, asking why they need to be “kepo.” Kepo is shorthand for stands for “Knowing Every Particular Object,” or being a busybody and trying to poke one’s nose into everyone’s business 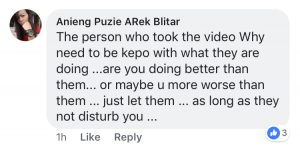 Another netizen objected at the use of the term ‘bangla’ and asked the administrator of the page to change it. 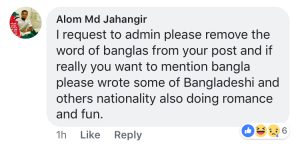 Yet others pointed out that such behavior is not just seen among domestic helpers and foreign workers, since it is commonly seen among locals, especially young people, as well

Another expressed his concern over the breach of privacy the person who took the video committed. For others, the important issue is that if a domestic worker should get pregnant, it is the employer who is unduly burdened. This is understandable, since based on the law, should a domestic worker get pregnant, it is her employer that receives a hefty fine of $5000, since this violates the work permit. This is most likely one reason why it’s a cause for concern when employers see domestic workers having boyfriends. 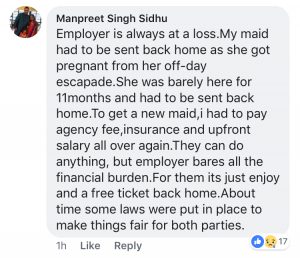