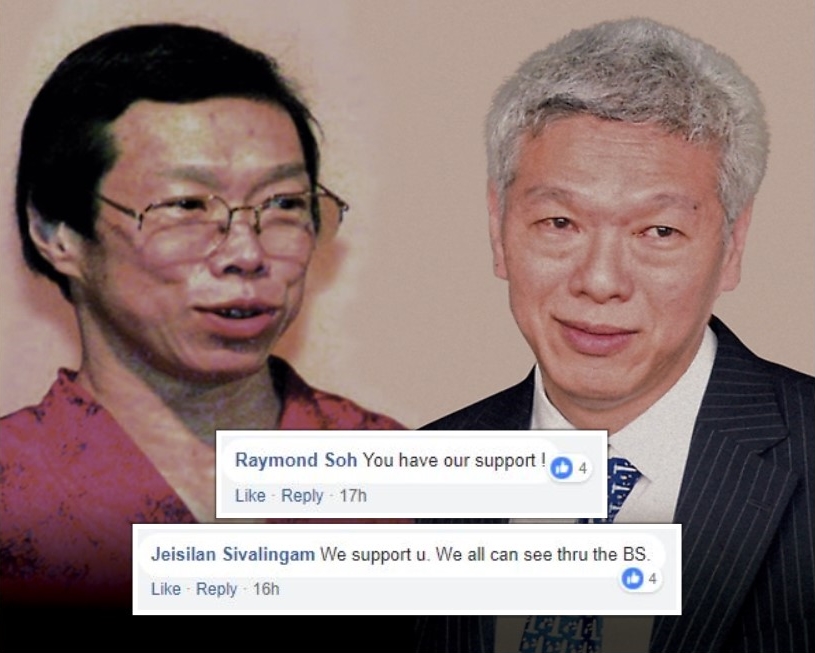 Netizens have expressed overwhelming support for Lee Kuan Yew’s younger children, Lee Wei Ling and Lee Hsien Yang, after the two criticised the ministerial committee’s report on what might be done to their family home, yesterday.

The ministerial committee charged with formulating options for what might be done with the late founding prime minister Lee Kuan Yew’s home at 38 Oxley Road have quietly released three broad options for the property in a report this afternoon.

The three options laid out by the committee are to preserve the property and gazette it as a national monument or for conservation; tear down the house and only retain the iconic dining room; or demolish the house entirely.

The committee noted that while Lee Kuan Yew desired for the property to be demolished, he was apparently prepared to accept alternatives, “provided that suitable arrangements were made to ensure that the property was refurbished and kept in a habitable state and the family’s privacy was protected”.

DPM Teo asserted that the committee did not make any recommendations on what should be done with the house since Dr Lee Wei Ling still resides in the house. He said: “The various options outlined in this report are drawer plans to help a future government make an informed and considered decision about the property when it becomes necessary.”

The public feud made headlines worldwide when Dr Lee Wei Ling and Lee Hsien Yang accused their elder brother of abusing his power as head of government and using state organs against them to preserve the house against their father’s wishes, in a bid to consolidate his grip on political power.

The younger children of Lee Kuan Yew also alleged that PM Lee had convened a secret committee to make a decision on the house, thereby attempting to circumvent their authority as executors of their father’s will. The committee that released its report today was set up in June 2016 – nearly a year before the dispute spilled into the public domain.

Contrary to the PM’s acceptance of the committee’s conclusion, his siblings criticised the report and said that their father’s desire to have the house demolished was unwavering and unambiguous.

Calling out the ministerial as the “once-secret ministerial committee,” the siblings took issue with the committee’s claim that their father was prepared to accept alternatives and reiterated that he expressed his desire that the house be demolished and never be opened to the public in his final will:

Dr Lee Wei Ling also released a status update on Facebook in which she harshly excoriated the committee by indicating that they might possess an “unbelievable lack of intelligence or determined denial to not understand what Pa & Ma so unambiguously wanted.”:

The ministerial committee subsequently responded to the statements released by Lee Wei Ling and Lee Hsien Yang and told reporters that it notes the siblings’ comments and claimed that their views “had already been carefully weighed by the Committee” along with other “Parties in their personal capacities”.

Netizens responding to the younger Lee siblings’ views expressed their overwhelming support for the pair and added that they hope that the house will be demolished, as per the late founding prime minister’s wish: