Netizen wants to riot because of new PMD law

The woman, only known by her instagram handle as ‘bby’ wrote that Singapore is “probably (going to) have riots soon”.

In a series of expletive-laden posts on Instagram, one user took to calling out the establishment for implementing a rule that banned electric scooters from footpaths.

The woman, only known by her instagram handle as ‘bby’ wrote that Singapore is “probably (going to) have riots soon”. 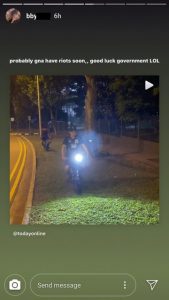 She also wrote, “y’all can go ahead and tell me that rioting is illegal in sg but I’m sure that (people) would fight for their rights because government (are) doing s***s”. She opined, “F*****g idiots only think that the accidents occur because of pmd riders, lol haha what (about) those walking on the cycling path w earpods blasting music in their ears and didn’t heard the pmd riders telling them to excuse?”

“No riding on pavement, roads and even grass? Then ride where? Then in the first place y’all shouldn’t even come out w ul2272. I pity those that use their hard earned money to get the ul2272 scooters jus (sic) to go by law”. 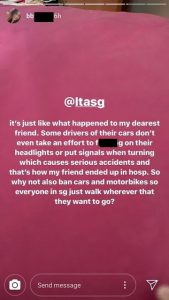 On 10 September 2018, the Land Transport Authority (LTA) announced that the Parliament had passed the Land Transport (Enforcement Measures) Bill which adopts UL2272 as the new safety standard for Personal Mobility Devices. This was to tackle the rampant cases of fire involving poorly made devices. These fires largely consisted of scooters that were illegally modified, purchased from errant online sellers, and models that did not adhere to the Spring Singapore safety certification requirements.

Electric scooters will be banned from footpaths in Singapore from Tuesday (Nov 5), with offenders facing fines of up to S$2,000 and jail time of up to three months once the ban is strictly enforced from 2020.

The use of e-scooters remains banned on roads here, although the use of such devices will be allowed on cycling paths and park connector networks.

Senior Minister of State for Transport Lam Pin Min said “From Jan 1, 2020, we will carry out strict enforcement, and those caught riding an e-scooter on footpaths will be liable for a fine up to S$2,000 and/or jail up to three months”. /TISG

Singapore – The police are investigating a case of "intentional harassment" involving Foodpanda delivery orders sent to a Housing and Development Board (HDB) flat in Joo Seng after a resident highlighted a case of "prank orders" in social media. On Friday (Feb...
View Post
Featured News

Singapore – The contractor that “erroneously” cleared a forested area at Kranji has announced it has been issued a stop-work order by JTC and is assisting the developer with investigations on the issue. On Feb 16, state-owned industrial property developer JTC responded...
View Post