Neighbour from hell in Yishun terrorises neighbours who live above her 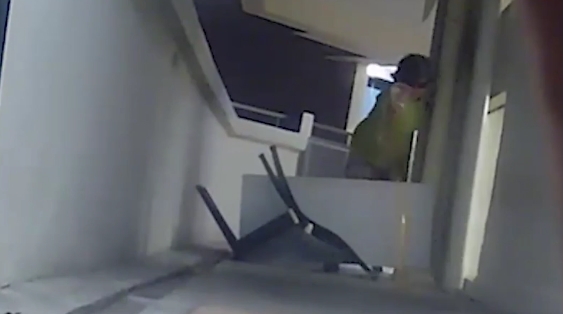 Shin Min Daily News shared a video clip of a neighbour from hell who terrorised 2 of her neighbours at Block 112 of Yishun Ring Road. According to the news site, the incident started 2 years ago, when one of the neighbours found a mixture of oil and salt on her metal gates causing it to rust. The other neighbour found a pile of rubbish on her bicycle along the corridor soon after.

This led them to install a CCTV and they found out that the acts of mischief were caused by a woman who lived one floor below them. The video clip shared by Shin Min showed the woman in sunglasses throwing toilet paper, sanitary pads, braised meat sauce, and even urine at her neighbours’ flats.

The 2 affected residents set up a barrier using tables and chairs to deter the neighbour from hell who lived below them, but even that did not help. The acts have continued despite calls to the police as well as notices against such behaviour by the town council.

Shin Min said that the woman in shades refused to answer her door when they tried to talk to her.Follow us on Social Media