Two enforcement officers from the National Environment Agency (NEA) were allegedly seen sitting at an area that was cordoned off with barricade tape and talking without observing social distancing.

In a tip-off to TISG, one netizen alleged that when she was heading out to buy groceries, at about 3.15pm yesterday (Apr 29), she saw the two NEA officers sitting at the service shelter playing with their phones and watching a movie on it.

According to photos taken, the two officers were also sitting at an area cordoned off with barricade tape. 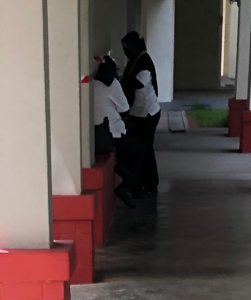 She added that when she returned after buying groceries, the two officers were standing together, “both still chatting there without social distance”.

The woman added that the NEA officers were supposed to be the ones enforcing the rules and observing social distancing measures, “but sad to see they are also the one breaking it”.

She also added that the two officers were sitting at the service shelter between Block 878 and 879 at Woodlands Ave 9.

According to the netizen, she identified them as NEA officers from the tags and IDs that they were wearing, as well as through their uniforms.

TISG has reached out to NEA for comment and clarification.Follow us on Social Media