Mother of Chinese girl against her relationship, says: Indian guys rape girls and are dangerous

Many who commented on the woman’s post said that there would always be people who have racist mentalities, but that speaking up about the matter helped to create more awareness.

Singapore — One Chinese girl in a relationship with an Indian boy wrote about how her parents disapprove and express blatantly racist statements.

In a message to popular Facebook page Wake Up, Singapore, the woman wrote that when her parents found out about her interracial relationship, “their faces immediately changed”.

“my mom proceeds to tell me about how [I]ndian guys r*** girls and they are ‘dangerous’”, she wrote. She added that her mother also pointed out examples of how two of her coworkers were abused by their husbands.

In her message on Monday (Aug 23), the woman added that her father was so angry with her relationship that he hurled insults and vulgarities at her. Her father also told her that she was a disappointment to her family and that “there are plenty of [C]hinese guys that [I] can date”.

“[I] really don’t see how dating someone of a different race is very embarrassing/shameful for one because interracial relationships are actually normalized now”. The woman wrote that she even told her parents that they should not be racists towards others or make such strong statements when they do not even know her boyfriend.

Her parents however, were of a different school of thought. “my parent[s’] workplace also [has] people of different races and they told me that they remained a distance with them and would only talk to them when they need them”, she wrote. The woman continued: “this is definitely not what [I] want to teach my child in the near future and [I] hope that we will be able to change our mindset as time goes by”.

She wrote: “you have no f*****g idea how much it hurts to be discriminated against just because you have a different skin tone” and called for people to be more open-minded and accepting towards others.

Many who commented on the woman’s post said that there would always be people who have racist mentalities, but that speaking up about the matter helped to create more awareness. 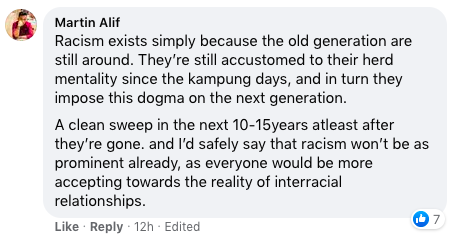