Business & Economy Startups MoneySmart founder Vinod Nair on why his company will never lose its... 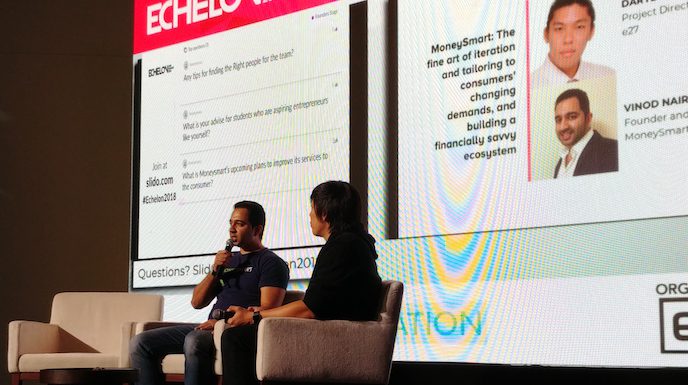 At the Echelon Asia Summit 2018, Vinod Nair also expounded on how to scaling a company the right way

Singapore-based personal finance portal MoneySmart is a household name among digital-savvy Singaporeans. In fact, it is one of the oldest players in the Singapore’s personal finance space, having entered the game almost 10 years ago in 2009.

But its journey towards its success hasn’t always been easy. Being a first mover has its advantages, and disadvantages. When MoneySmart came riding into the town with products in tow, the traditional finance folks, a.k.a banks, were not quite ready for what it had to offer, yet. And because there was no market, the company struggled with monetising its products, said Vinod Nair, founder and CEO of MoneySmart.

Also Read: Southeast Asia is like European Union but without a proper framework, says Ian Goh of 01VC

Nair was sharing these anecdotes at a fireside chat on the second day of the Echelon Asia Summit 2018. His session was moderated  by Daryl Chung, who is the programs director at e27.

Thankfully, these banks soon started to see the benefits of leveraging digital platforms to sell their products. The government also assisted in this drive, by introducing a legislation called the Personal Data Protection Act (PDPA) that curtailed organisations ability to disseminate personal information of its clients freely — this meant that banks could no longer rely on telemarketing.

There are now an abundance of personal finance services and platforms, and many, Nair said, offer little differentiation from each other. Nevertheless, it is wise to keep abreast of current market trends and developments in this space.

But what is equally or if not more important is the need and discipline to stay focused on the company’s core values. To really dig deep and focus on what makes your product successful. Nair said the team took a step back and asked themselves why many readers or customers were still coming back to MoneySmart.

They realised that it was because their platform was about helping people achieve real-life goals, such as raising a family and buying a house. Nobody (or at least the layman) likes reading about the technicalities of personal finance. They want to know how it helps them get where or what they want. So the focus of MoneySmart is to really make these information transparent and simple to understand so that readers have a clear understanding of what it takes to achieve their financial goals.

This is what Nair believes will make MoneySmart a relevant platform for ages to come. Market trends come and go, and new financial products will emerge; but starting a family is an intrinsic part of the human experience; it cuts across all countries and cultures, and it will never go out of style.

To ensure everyone at MoneySmart is aligned with its core values, the company has a rigorous hiring process. Nair said that there are three parts. First, the interviewee’s career history. Then, there will be a case study test. Finally, the team will conduct a culture review.

Nair said that every employee needs to competent and culturally compatible — with the emphasis on culture. His reasoning was that an employee may be highly competent, but if they are not a team player and only look out for themselves, it causes friction within the organisation and that affects the quality of the work and product.

Also Read: RedDoorz founder’s recipe for success: Focus on one city, one market, one segment at a time

On the flip side, if the employee who is less competent but is a good culture fit, they can make it up with their ability work well as a unit. A team of highly capable team aligned towards the same goals can make up for any competency gap.

With regards to scaling, Nair said he took on multiple roles managing different teams during the beginning phases of the company. But during the period between the Series A and B round, he realised donning multiple hats wasn’t going to cut it at anymore as the company started experienced fast growth. It was critical to hire people who had more experience and expertise than him in other areas (this goes back to plugging competence gaps mentioned earlier).

Nair said that Series A is all about scaling while Series B is about “putting the pedal to the metal”. This is a very a tricky time because the team is scaling to 2 – 300 people. And you need everyone to be on the same page, embodying the same company values.

Nair said that his goal is to provide a fulfilling experience to every employee that passes through MoneySmart — from the onboarding phase to talent development. It is not possible to retain every employee, especially when they have maximised their potential in the company and will seek opportunities elsewhere t0 grow.

But this does not bother Nair. “When you help them [employees] to grow you should realise that there will be a time for them to move on,” he said. The important thing is to help them achieve their best work and leave them good memories of the company.

The post MoneySmart founder Vinod Nair on why his company will never lose its relevance appeared first on e27.