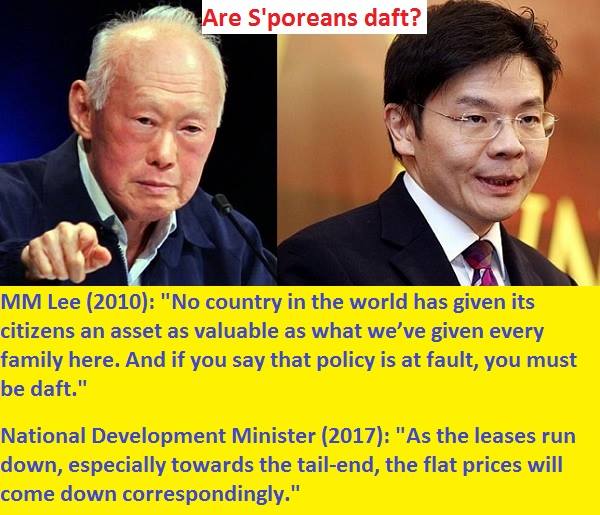 In 2010, then Minister Mentor Lee Kuan Yew warned Singaporeans not to cast a protest vote against the PAP over the affordability of HDB flats (‘Don’t cast protest vote’, ST 27-1-2010).

At the time, Singaporeans were complaining about the rising HDB flat prices. MM Lee told Singaporeans that they ought to understand the PAP Government sells them at a subsidised price, below market rate, so that they can own an asset that will appreciate in value over the years.

“We give our buyer an asset which is below market price the moment he buys it. So there is no profit, it’s a loss, but there’s a strategy behind that loss,” he said. “That loss is to give the man an asset which he will value, which will grow in price as the country develops, as his surroundings become better.”

“This is a social responsibility which we have undertaken and that’s the reason why we are re-elected,” he added.

Referring to opposition parties who were targeting Mr Mah then, he said, “If Mr Mah is not re-elected and these three wise men take over, then I say you better sell and get out quickly.”

“If Mr Mah is unable to defend himself, he deserves to lose. No country in the world has given its citizens an asset as valuable as what we’ve given every family here. And if you say that policy is at fault, you must be daft.”

But last month (24 Mar), the new National Development Minister Lawrence Wong wrote on MND blog telling Singaporeans now that when the lease of their HDB flat runs out, they will have to give it back to the State. That is, the value of the flat will become zero.

“For the vast majority of HDB flats, the leases will eventually run out, and the flats will be returned to HDB,” he wrote. “As the leases run down, especially towards the tail-end, the flat prices will come down correspondingly (towards zero).”

As for people who are hoping to get a new flat under SERS, the Minister warned, “Do not assume that all old HDB flats will be automatically eligible for SERS.”

So, it seems that MM Lee is terribly wrong about Singaporeans owning HDB flats which can appreciate in value over time. Minister Wong now confirms that as HDB leases run down, the flat prices will also come down correspondingly. The price won’t grow as the country develops, it seems.

And so, with or without the PAP, it seems Singaporeans should sell away their HDB flat at some point to get out quickly before the price goes ‘kaput’.

The asset given by the PAP government isn’t as valuable as what MM Lee touted to be, it now appears.

Were Singaporeans really that ‘daft’ to find fault with HDB prices?

Incidentally, Mr Mah was quietly removed as National Development Minister after 2011 GE, one year after MM Lee said Singaporeans were ‘daft’ to complain about HDB prices.