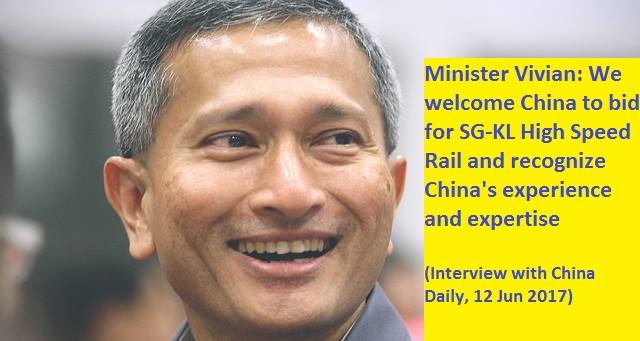 In a change of tune, Minister Vivian now welcomes Chinese companies to submit bids on the Singapore-KL High Speed Rail. This was reported by China Daily today (12 Jun).

In a written interview with China Daily, which is run by the Publicity Department of the Communist Party of China (CCP), Minister Vivian said Singapore “recognizes China’s experience and expertise” in high speed rail.

The international request for bids will be jointly put out by Singapore and Malaysia later this year, he said.

With regard to China’s Belt and Road Initiative, Minister Vivian said Singapore is an “early and strong supporter”. This is despite the fact that China did not invite PM Lee to its recent Belt and Road forum while some 30 other heads of state were welcomed by China to the Beijing forum.

“Singapore will continue to support Chinese companies as more venture abroad,” he added.

It was not that long ago when actions by Singapore angered China particularly over the South China Sea issue. In a speech to Parliament last April, Minister Vivian explained his foreign ministry’s plans and policies.

Referring to China and its claims in South China Sea, he told Parliament that Singapore cannot accept that “might is right”. China has done extensive reclamation work, built runways and ports, and deployed significant military assets to the disputed waters, he said.

While some claimant states have also done similar activities, these “have not been on the same scale or pace as that conducted by China”. “What a major power does inevitably carries a far bigger signature. China, for its own reasons, has become more assertive in the East and South-east Asian regions,” he added.

Singapore, of course, is not a claimant in the South China Sea disputes between China and some of the SE Asia countries. Neither is the US. However, Singapore supports the American “pivot-to-Asia” policy aiming to curtail China’s influence in South China Sea.

Things came to a head in Sep last year when Global Times, owned by CCP, reported that Singapore wanted to include the Philippines’ position on an international arbitration ruling on claims to the South China Sea, during the international Non-Aligned Movement (NAM) summit held in Venezuela that month.

The Chinese foreign ministry later also joined in, blaming an unspecified “individual nation” for stirring up tensions over the South China Sea dispute by insisting on including South China Sea issues in the final document of the NAM summit.

Global Times reported that during the summit, the Singapore delegation tried to add to the summit’s final document, an endorsement of an international tribunal’s ruling on claims to the South China Sea. Citing unnamed sources who attended the NAM meetings, the report said Singapore delegation grew “exasperated” and responded with inappropriate remarks to other delegations opposed to including the endorsement.

“During and after the meeting of foreign ministers, Singapore continued to stir up problems and openly challenged the chair nation Venezuela’s ruling, which again drew clear opposition from many countries,” the report stated.

“To satisfy its own interests, Singapore had been pestering [other states] during negotiation and meetings. It dragged meetings into late night many times, which caused discontent among other countries.”

Later, Singapore’s ambassador to China, Stanley Loh, refuted the Global Times report in an open letter to the editor-in-chief of Global Times, saying the report “attributed actions and words to Singapore which are false and unfounded”.

Loh denied Singapore raising the South China Sea issue or the arbitration ruling at the summit. Rather, the proposal to update the NAM declaration’s Southeast Asia paragraphs, including those referring to the South China Sea, reflected the consensus position of all 10 Asean members, the ambassador said.

“We are disappointed that an established newspaper published this irresponsible report replete with fabrications and unfounded allegations with no regard for the facts,” Loh said.

In response to Loh, editor-in-chief of Global Times posted an open letter to the ambassador online, in which he insisted that the Global Times’ sources were “serious and reliable” and the report reflected the truth.

“As an ambassador based in China, you were probably not able to attend the meeting in Venezuela nor be a witness,” the editor-in-chief said. “Maybe your government asked you to say that.” He also expressed “disappointment” towards Singapore’s position in the South China Sea dispute.

“Look at how most Asean countries deal with the sensitive South China Sea ruling in a balanced way,” he wrote. “I think Singapore should feel ashamed when you tried to trip up China, your largest trading partner.”

“The facts are clear,” a foreign ministry spokesman said. “Some individual state(s) insisted to include one-sided content related to South China Sea in the final document, but it was not supported by most NAM member countries. China hopes related state(s) respect China’s position and the agreement reached with Asean countries.”

But Singapore was still not satisfied for losing an argument. Ambassador Loh retaliated back by reiterating that the Global Times report was inaccurate. “Global Times did not attend the meetings and had to rely on information from unnamed sources,” Loh said. “In contrast, Singapore is a member of NAM and had participated in all the proceedings at the Summit.”

But obviously, Loh may have forgotten that ASEAN countries like Laos and Cambodia are long time ally of China. Global Times might not have attended the NAM meetings but their long time pals did. Whatever you say or do in any Asean meetings, China will know immediately.

Loh is a Singapore government scholar who scored ‘A’s in exams. He used to be Press Secretary to Goh Chok Tong. In 2015, he was conferred the Public Administration Medal (Gold) by President Tony Tan. It’s not known if these scholars are savvy and “streetwise” enough to deal with the Chinese, who are obviously experts in political maneuvering and intrigue for thousands of years.