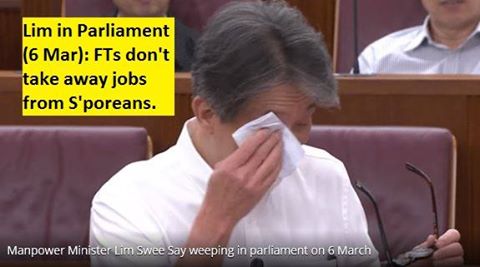 During the Committee of Supply debate on the budget of Manpower Ministry in Parliament yesterday (6 Mar), Minister Lim Swee Say openly cried (yet again).

He choked back in tears as he talked about the success story of a single mother with two children struggling to upgrade herself so as to get promoted.

But of course, many more retrenched and out-of-job PMETs cried silently in bed to themselves every night, wondering where to get their next income to feed and clothe their children. These people don’t openly show or talk about their plight.

Nevertheless, Minister Lim was happy to announce that he had taken 50 companies to task for failing to give Singaporeans fair consideration when hiring. Also, more than 500 Employment Pass applications from these employers have been rejected by his ministry or withdrawn by the companies, he said.

It was also revealed that at the end of February this year, there were 250 companies on his watchlist, up from 100 at the start (ie, 150% increase). These are companies that were singled out or reported for discriminating against the hiring of Singaporeans in favor of foreigners.

In the debate, Mr Lim said that excluding maids, there are currently 1.2 million foreigners in our workforce. While about 45% of them do jobs that locals will opt for, “we do not have enough locals to do these jobs”, he said.

The remaining 15% of foreigners or 180,000 working here are in global headquarters, he added. Indeed, under free trade agreements we have signed with foreign countries, they do permit intra-corporate transferees to work in Singapore. For example, as acknowledged by the govt website, the CECA we signed with India allows Indian intra-corporate transferees to work in Singapore for up to 2 years with extension up to even 8 years each.

In any case, in trying to drive home the point that foreigners do not take jobs away from Singaporeans, Mr Lim commented that the foreigners working here is actually a boon for Singaporeans. It exposes Singaporeans to an “international working environment” and global best practices, he said.

“On the whole, most of the foreigners working in Singapore do complement our local workforce rather than substitute our locals,” he assured.

But prominent blogger Leong Sze Hian questioned some of the assumptions of Mr Lim.

“The most important statistics are arguably still missing – what percentage of the jobs listed in the National Jobs Bank went to Singaporeans, PRs and foreigners?” Mr Leong asked.

As to “collectively, these firms have hired 800 more Singaporean professionals, managers and executives since being placed on the watchlist” – this may be akin to just “a drop in the ocean”, Mr Leong said. “I understand that the non-seasonally adjusted number of unemployed Singaporeans may now be about 100,000 with most of them being PMETs.”

And to Mr Lim’s comment that foreigners are not here to take away Singaporeans’ jobs, Mr Leong asked, “How do we explain the startling statistics that the employment change for the two years from 2015 to 2016 was 11,400 jobs to locals against 37,300 to foreigners?”

It’s certainly very easy for a million dollar minister to say that FTs don’t deprive Singaporeans of jobs but try to tell that to the still out-of-job PMETs who are crying themselves to sleep every night.