Singapore — Local YouTuber Dee Kosh — whose real name is Daniel Koshy — has been accused of sexually harassing teenage boys by a number of netizens.

Several individuals have alleged that the 32-year-old asked for sexual favours from boys as young as half his age and tried to sexually groom teenage boys under the guise of wanting to work with them.

One post that went viral online recounted how a 17-year-old boy, who was flattered that Dee was messaging him, was coerced into sending selfies daily before being asked to send photos of his body. The netizen added that many of the alleged victims were afraid to speak up because he had allegedly bullied them into remaining silent: Instagram user @_epaul is believed to have been the first netizen who exposed Dee. He claimed that the man reached out to him to recruit him as talent for his YouTube channel but his messages were anything but professional.

Dee appears to have asked @_epaul when he was turning 18 and whether he was  available for an overnight shoot. 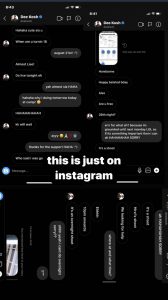 The latter said he was speaking up in the hope that others would come forward and not allow Dee to get away with such acts. He claimed that the man kept asking him to be his friend with benefits. 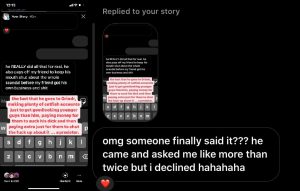 Another person also claimed that Dee solicited explicit pictures from his friend and allegedly offered to pay the friend money for sexual acts: 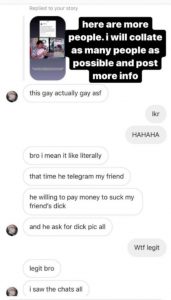 In perhaps the most incriminating screenshots, shared by Twitter user @diulei, Dee allegedly offered S$1,000 to a minor, inviting him over to do something presumably sexual before telling the 15-year-old that he could get back home by 1 am. Dee allegedly asked @diulei to join a secret chat so his messages could not be screencaptured. 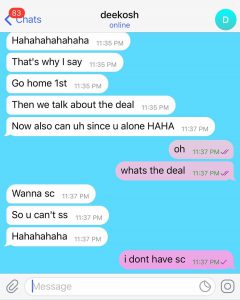 @diulei alleged that his chat began with the YouTuber asking to know his age and asking him to chat while he was snuggled up in bed: 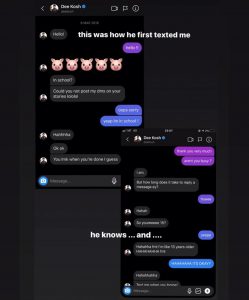 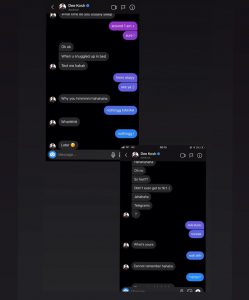 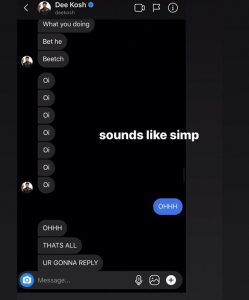 Twitter user @gggnaaarly reached out to Dee for clarification on the allegations. Sharing screenshots of their alleged conversation, the netizen claimed Dee said his messages were just a “tactic” to attract young men to join his agency: 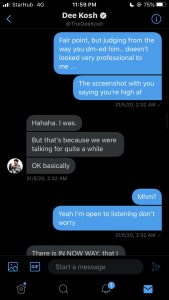 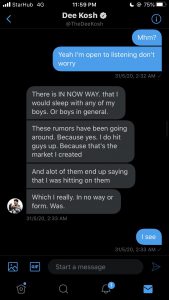 Dee has said he was taking “the necessary steps to clear all this up” and added that he was “denying all allegations made by the people who have said what they’ve said“.

Several people commenting on the allegations online pointed out how ironic it perhaps was that Dee was quick to jump on the bandwagon of those criticising fellow YouTuber Eden Ang when he was accused of sexual harassment against an 18-year-old former employee. /TISG