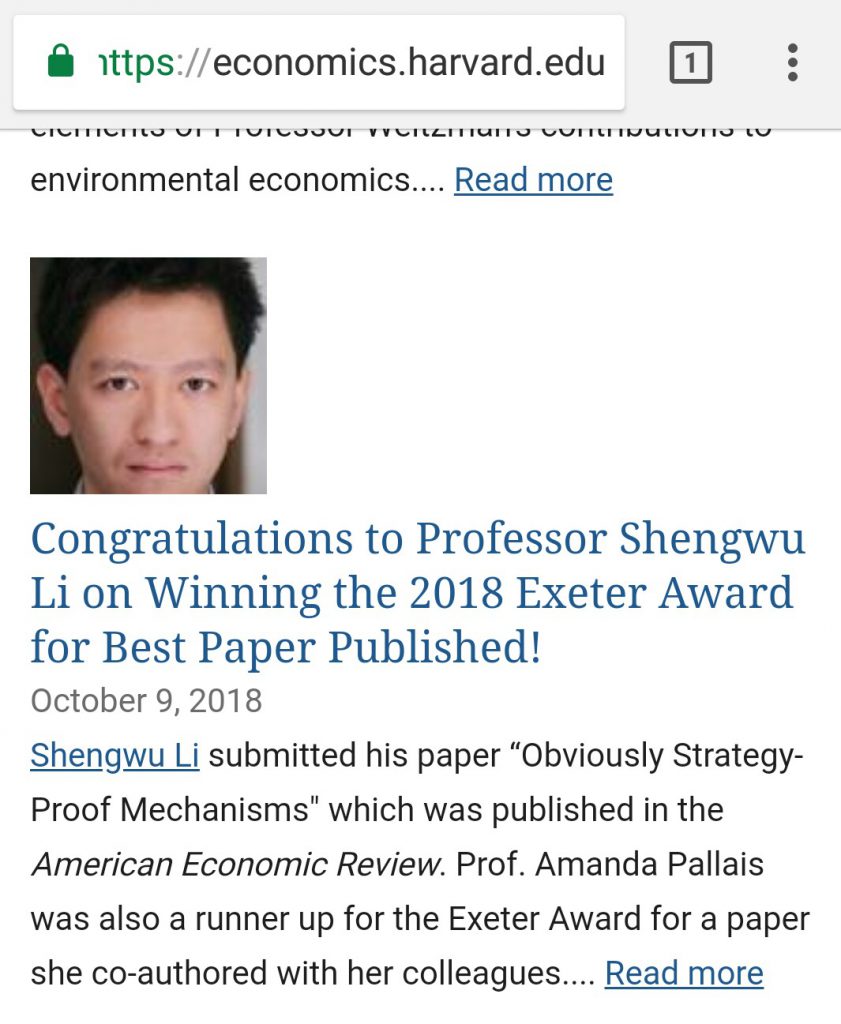 The Exeter Prize is an economics prize of the University of Exeter Business School, which has been awarded since 2012. The Exeter Prize is awarded to the best paper published in the previous calendar year in a peer-reviewed journal in the fields of Experimental Economics, Decision Theory and Behavioural Economics.

According to the publication Market Design, “The paper proposes and analyzes a desirable property for mechanisms implementing social outcomes. A mechanism is a game whose rules are designed by a social planner for the purpose of implementing a certain desirable social outcome (e.g., efficiency or fairness).”

“Such mechanisms are always designed under the assumption that the parties involved will play an equilibrium outcome. Strategy Proof mechanisms received special attention in the literature, because they implement an outcome that is not only an equilibrium, but also one with dominant strategies, i.e., no player can do anything better than playing the strategy that leads to the socially desirable outcome, no matter what other people are doing. Yet as experimental and empirical results have shown, in real life, strategy proof mechanisms don’t always guarantee that players will do what they are expected to do. This is mainly because the reasoning behind the “right thing to do” is often complicated even in cases that admit a dominant-strategy equilibrium (one prominent mechanism of this sort is the second-price auction).”

Li’s paper proposed a concept of “obvious mechanisms.” This mechanism not only admits a dominant-strategy equilibrium, but also guarantees that it is cognitively simple to confirm that playing anything else is irrational.

Li’s approach allows for mechanism design theory more applicable, and closer to reality. It also warns against choosing social mechanisms that we as game theorists hold to be secure, but when applied in the real-world will prove to be too complicated for people to do the right thing.

The winning paper was selected by the panel of Rosemarie Nagel (Pompeu Fabra University), Michel Regenwetter (University of Illinois) and Eyal Winter (Hebrew University of Jerusalem). Li will be visiting the University of Exeter to receive the award and give a public lecture.

Market Design said that this year was again exceptionally competitive one for the Exeter Award with a large number of excellent nominations.

In addition to the winner, this year’s shortlist were:

This is the second major award which went to Li this year. In June Li won the prestigious Best Paper Award at the 19th ACM EC’18 Conference on Economics and Computing held at Cornell University between 18-22 June 2018. Shengwu and co-author Mohammad Akbarpour from Stanford University won the award for their paper entitled “Credible Mechanisms”

Shengwu is presently a Junior Fellow at Harvard University. He is due to join the Economics Department faculty of the renowned US school as an Assistant Professor from next month onwards.

Li is currently facing a contempt of court case filed by Singapore’s Attorney-General’s Chambers (AGC). The 32-year-old has asserted that he has no intention to disrupt his “happy” and “fulfilling” life in the US by returning to Singapore to face the legal proceedings initiated by the AGC.Follow us on Social Media