The Independent News
Uncategorized Lesson for Arsene Wenger: Never shame a referee after a match

Lesson for Arsene Wenger: Never shame a referee after a match 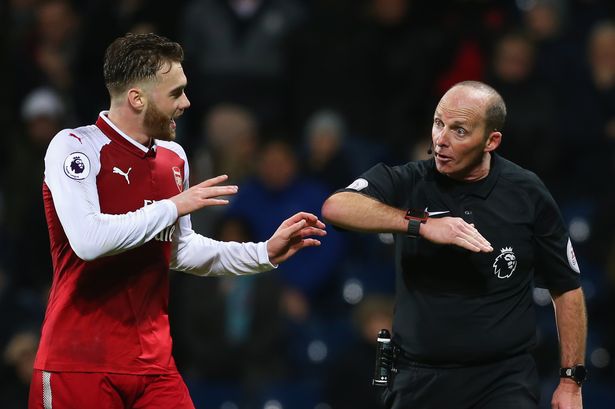 THE longest serving British football manager is now in line for probably a lengthy stadium ban after an angry confrontation with the referee.

Arsenal manager Arsene Wenger challenged referee Mike Dean in the officials’ room over a controversial penalty incident late in Sunday’s 1-1 draw at West Bromwich Albion and it is alleged he launched a foul-mouthed tirade and “questioned his integrity.”

He now faces a Football Association (FA) charge and has until Friday to reply why further disciplinary action should not be taken against him.

Wenger is a legendary figure in British football. The 68-year-old French-born manager has been Arsenal manager since October 1996, where he has since become the club’s longest-serving manager and most successful in terms of major titles won.

Football pundits give Wenger credit for his contribution to the revolutionising of football in England in the late 1990s through the introduction of changes in the training and diet of players.

But for the moment, Wenger is definitely in the hottest soup!

The FA could now bar him from attending games altogether, as this latest incident comes less than 12 months after he served a four-match suspension from the touchlines for pushing fourth official Anthony Taylor during a home game against Burnley last January.

Wenger could also face further FA action and a potential fine after claiming Dean “saw what he wanted to see” in the controversial incident during his Tuesday press conference, which again questions the referee’s integrity.

Dean awarded a debatable penalty against Calum Chambers which resulted in West Brom getting a last-gasp equaliser and costing Wenger all three points.

There is usually a 30-minute “cooling off” period after matches when managers are not supposed to enter the referee’s room.

It is believed Wenger confronted Dean during that time, as well as doing so on the pitch at the final whistle.

For the record, by FA decorum, referees can allow managers into their room with permission, and the FA will want to establish whether that was given.

The biggest question: Right or wrong, does it pay to publicly embarrass match officials? And even if they made the odd questionable decision, there are other proper avenues to take them to task.

Likewise, I understand Wenger’s deep-rooted frustration as Arsenal is now in sixth position with 38 points from 21 matches, behind Manchester City, Manchester United, Chelsea, Liverpool and Tottenham. The Gunners (Arsenal’s nickname) are desperately trying to finish among the top four in order to qualify for Europe’s biggest competition, the Champions League.

In my books, after being involved in refereeing for over three decades, managers can criticise a referee’s performance but never ever question their integrity. Calling them names or swearing with four-letter words cannot be tolerated.

Sadly, Wenger’s track record with the men-in-black has a very long catalogue of disgraceful endings. Just take a look at 11 major incidents:

December 2004: Hit with a £15,000 fine and warned about his future behaviour for calling Ruud van Nistelrooy a ‘cheat’ after Arsenal’s 49-game unbeaten run came to an end at Manchester United in October.

April 2007: Fined £2,500 after a row with referee Steve Bennett at half-time of Arsenal’s draw with Portsmouth in December 2006.

May 2007: Fined £2,500 for accusing an assistant referee of lying about a brawl during Carling Cup final defeat by Chelsea in February.

November 2007: Given a one-game UEFA ban following their 3-1 defeat at Sevilla after he was sent to the stands for rowing with fourth official, Reinold Wiedemeijer.

September 2010: Given a one-game ban for improper conduct after appearing to pat fourth official Martin Atkinson on the back after conceding an injury-time equaliser at Sunderland.

September 2011: Two-match UEFA suspension for contacting his bench against Udinese while serving his March ban.

January 2017: Banned for four matches and fined £25,000 for verbally abusing and pushing fourth official Anthony Taylor after being sent off in their 2-1 home win over Burnley.
Following the leading British newspaper reports, I noticed that referee Dean has been heavily criticised for the last-gasp penalty-decision, with replays suggesting there was no intent from Chambers to intentionally handle the ball.

I watched the controverial penalty and personally felt Dean would have made a smarter decision if there was formal video technology (as now advocated by FIFA) to assist him. The angle from which Dean saw the incident made it look like Chambers was attempting to handle the ball. But if video technology had been in use, I believe he would have made a more informed decision.

But integrity and respect cannot be compromised in matters concerning the men-in-black.

As a former FAS referee and a S-League referee assessor, I know the importance of the “Respect” campaign done in many Asian, European, African and American countries with a series of new initiatives to confront the verbal and physical abuse of match officials.

British newspapers reported last year that the depth of a problem that is also now of increasing concern in amateur cricket and rugby following research that showed 94 per cent of football referees experience verbal abuse and one in five have been the victims of a physical attack.

A pitiful case is Manchester referee Ryan Hampson, who is only 18 years. He was punched, head-butted and spat at several times since becoming a referee three years ago and this is definitely not the right way to encourahe the younger generation to take to the whistle or the flag.

Whatever, Wenger is not above the law and must respond if he doesn’t want the tough book to be thrown at him. And believe me, it’s going to come down very hard at him.

The FA charge read: ‘It is alleged his language and/or behaviour in the match officials’ changing room after the game was abusive and/or improper and/or questioned the integrity of the match referee.’

He has until Friday to answer and going by the evidence at hand, I think it’s best for Wenger to accept the FA charge, plead for some form of leniency, which is debatable, but most important, accept the long suspension that’s almost certainly coming his way.

Suresh Nair is a Singapore-based journalist who has been involved with refereeing for over three decades as a FAS referee and now a Asian Football Confederation (AFC) referee instructor.