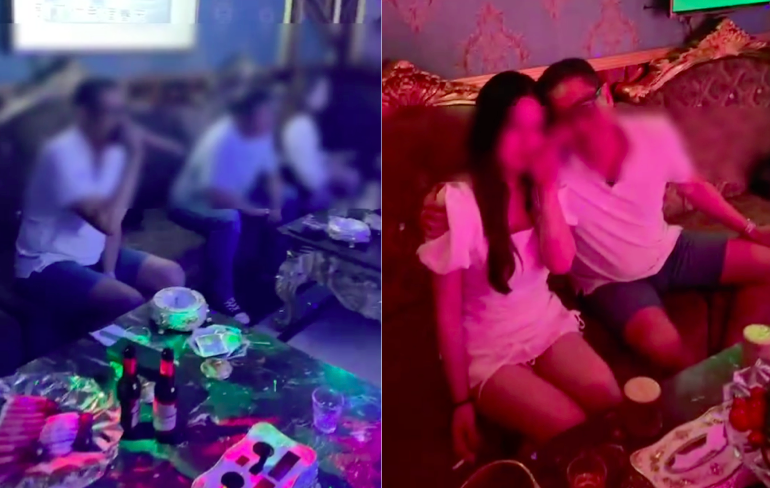 Singapore — Two videos that were allegedly taken at one of the Middle Road KTVs – which later were found to make up a large Covid-19 cluster – were circulated online and on WhatsApp messenger.

The KTV cluster was made up of patrons who visited various outlets that spanned across Golden Mile Complex, Textile Centre, Balestier Point and Tanglin Shopping Centre.

A total of 42 new Covid-19 cases are tied to a growing cluster linked to KTV outlets and nightclubs here, the Straits Times reported.

In the video clips, six people were seen eating, drinking, smoking and singing karaoke while at a KTV lounge. While they seemed to be spaced out as they were seated, it could be seen that a woman, who was not present in the first video, later joined the group to sit beside a man in a blue t-shirt. It is not clear from the videos which KTV lounge they were taken at.

KTV hostesses are known to move from one table to another over the course of a night, mingling with different groups. This rotation is colloquially known as “butterfly”, and often involves the hostess splitting her time between multiple guests, who each pay her a sum of about $50 to $100 at the end of the night.

The hostesses have also been known to move between multiple KTVs in one night, going to lounges that have more guests if their usual haunt sees lower patronage.

The index case, a Vietnamese woman on a short-term visit pass, had gone to a doctor on Sunday with symptoms of an acute respiratory infection. She was tested and found to be positive, with other cases – including others living in the same house – detected through contact tracing.

A total of 60 Covid-19 cases were reported on Wednesday, 56 of which were locally transmitted.

On Thursday (Jul 15), it was reported that the police are investigating several karaoke bars for breaching coronavirus restrictions and have arrested 20 foreign women for alleged “vice-related activities” after an outbreak linked to the nightspots.

The hawker centre at Block 75 Lorong 5 Toa Payoh underwent deep cleaning on Thursday (Jul 15) morning after a stall assistant who allegedly visited a KTV lounge over the weekend tested positive for Covid-19. /TISG