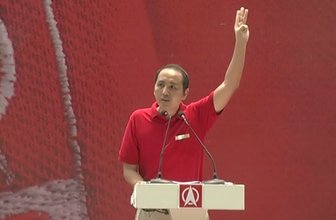 Two years ago, despite his affiliations with opposition party, Singapore Democratic Party (SDP), Dr Paul Ananth Tambyah was promoted to Full Professor with tenure at the National University of Singapore. Dr Tambyah is an expert in infectious diseases at the Department of Medicine in that University.
At that time, SDP in congratulating Prof Tambyah for his competence and dedication to work, also said that they were “encouraged that the NUS recognises and rewards talent without fear or favour”.
The political party has more reasons to cheer now. It’s candidate for General Election (GE) 2015, Bryan Lim, who works at a public hospital as a Manager has been promoted to the position of senior manager at the same hospital this new year.
Speaking about his promotion, Mr Lim said that his wife was resistant to his candidacy in GE2015 as she was worried that he would get the sack for contesting, but that he assured her that his boss and Chief Executive Officer did not object to him participating in the last election.
“Not only was I not asked to leave for standing up for my political values and beliefs, the healthcare organization which I worked for informed me officially that I have been promoted to Senior Manager wef 1 January 2016,” Mr Lim remarked.
Mr Lim contested as SDP’s candidate in Marsiling-Yew Tee GRC in the last GE, where his team garnered 31.3 percent of the votes cast.Follow us on Social Media