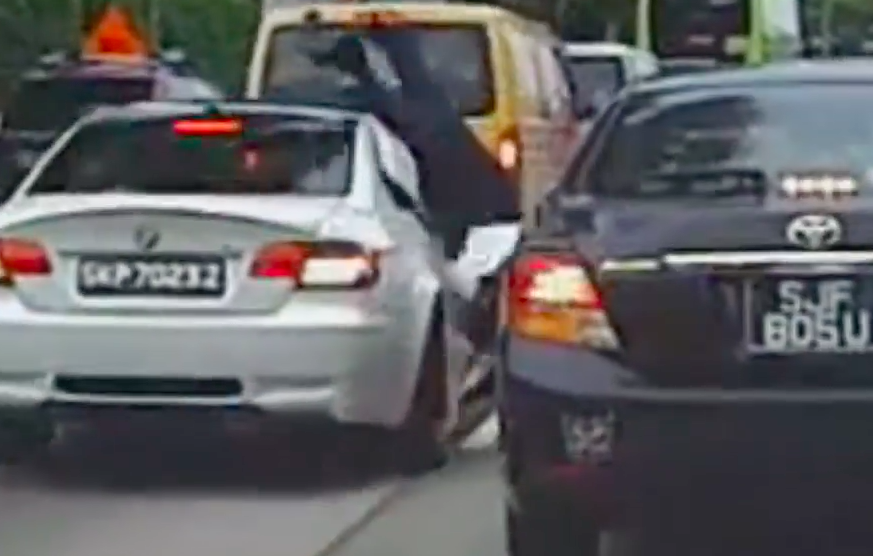 A woman was sent hurtling through the air and onto another car after she was hit by incoming traffic while jaywalking.

The incident occurred earlier this week (July 22), with video footage of the scene going viral.

In the video, the woman is seen attempting to cross three lanes of traffic, but was hit by a black Toyota sedan travelling on the right-most lane.

Upon impact, the woman flies and is thrown against a stationary silver car on the middle lane, with her head facing downwards and legs in the air, before landing on the road.

Videos of the accident were shared on Facebook pages Roads.sg and SG Road Vigilante on Tuesday, and the posts have garnered more than 63,000 views.

The police said that they were alerted to the accident along Balestier Road towards Lavender Road at 5.29pm.

The Singapore Civil Defence Force said the woman suffered from minor injuries and that she refused to be taken to the hospital.

Rule 22 of the Highway Code requires pedestrians at a light controlled crossing to wait on the footway until the traffic in front has come to a standstill. This means those on foot should keep a lookout for errant motorists regardless of how long the lights have turned in favour of the pedestrian.

Last year, an elderly jaywalked and jogging across four lanes of traffic and trying to cross before he was hit by a motorcycle who was likely in-between lanes. Because of the impact, the man was violently sent a few metres down the road.

Just last Thursday (July 18), a man tried to cross on a red light while engrossed on his phone. Instead of briefly apologising and stepping aside like any other pedestrian, the man became enraged at the oncoming driver.

He pointed to the traffic light repeatedly, which was clearly red, yet continued to argue with the driver.

When the vehicle tried to inch forward and pass the man merely took a step closer to block its way.

He daringly attempted to kick the vehicle’s bumper. The man even placed a foot up intending to stomp the car as it passed by. /TISG

Read related: Jaywalker sent flying into the air after hit by motorcycle, netizens do not sympathise at all