Last week, netizens were outraged when a public notice about the temporary relocation of a market in the Woodlands-Admiralty region bore the message in four languages: English, Malay, Mandarin and Hindi 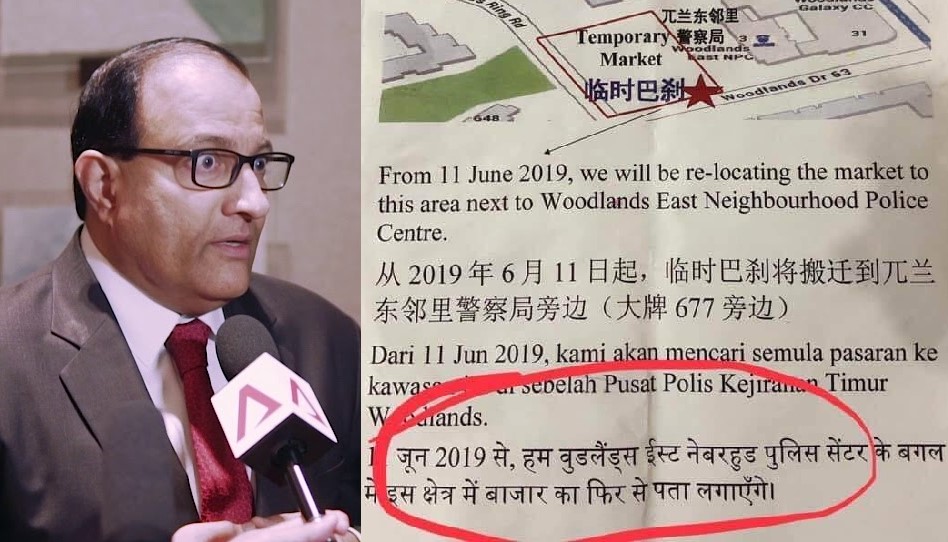 Ruling party politician S Iswaran’s defense of the contractors who replaced Tamil text with Hindi in a public notice has riled netizens even more instead of assuaging them.

Last week, netizens were outraged when a public notice about the temporary relocation of a market in the Woodlands-Admiralty region bore the message in four languages: English, Malay, Mandarin and Hindi.

It was later revealed that the notice was created an issued by the market operator. The operator, who said that his team used Google Translate to come up with the flyer, drew even more flak when his apology letter contained another error.

Minister for Communications and Information, Mr S Iswaran, commented on this issue on Sunday (24 Mar) but his response ruffled more feathers.

Speaking to The New Paper (TNP), Mr Iswaran reportedly said that the market operator had the “right intentions” but went about it the wrong way by utilising Google Translate. Noting that the operator has apologised and made amends, Mr Iswaran said: “We do need to understand that from time to time, despite best efforts, errors may occur.”

TNP further reported: “When it is an honest mistake, Singaporeans need to find the forbearance as a society to accept such lapses, said Mr Iswaran.”

Interestingly, Mr Iswaran commented on this issue on the sidelines of the annual Tamil Language Festival.

In a Facebook post, Mr Nair highlighted the plight of the market operator. He explained: “I found out that the wet market operator had circulated a flyer to inform residents about this. He wanted to send it in the four official languages but mistakenly used Hindi rather than Tamil having used Google translate. This has understandably upset some of our friends in the Tamil speaking community.

“The operator is deeply apologetic and said his aim was to include all the languages but his team made a mistake. He is a small business operator and did not have anyone on his team who speaks either Tamil or Hindi.

Mr Nair’s colleague, Mr Amrin, added that the market operator is “sincere and genuine” and did not act maliciously.

Netizens, however, remain upset. Suggesting that it is convenient for the authorities to call such mistakes “honest” when it comes from parties affiliated with them, several netizens asked why such public notices are not proofread by the right individuals before being broadcast: