Netizens were irked by Mrs Teo actions as Jolovan Wham has helped migrant causes often, one of them being raising awareness to the plight of 179 foreign workers who were abandoned by their employer 12 years ago

Mrs Teo had her lawyers send letters of demand to Mr Wham and Facebook user Donald Liew to withdraw and apologise for allegations of corruption and profiteering they had allegedly made against her.

Both Mr Wham and Mr Liew had shared posts suggesting that Mrs Teo was involved in the Government’s decision to commission Surbana Jurong Pte Ltd to develop COVID care facilities, since her husband Teo Eng Cheong is the CEO (International) of the firm.

Surbana Jurong came out strongly against such claims. Calling the allegations “unfounded accusations of profiteering and corruption,” it said: “These allegations are not only untrue, they are disrespectful of our colleagues who have made enormous sacrifices, including putting their health at risk, to deliver the projects under challenging conditions for the benefit of our community.

“We absolutely refute the allegations and will not hesitate to take legal action against any perpetrator who continues to make scurrilous attacks against our company.”

Mrs Teo also refuted the allegations, in a statement issued by Allen & Gledhill on her behalf on Wednesday (20 May). Calling the claims “untrue, scurrilous and completely baseless.” Mrs Teo asserted: “Neither my spouse nor I have any involvement with the commissioning of these projects or the monetary transactions.”

The Minister also instructed her lawyers to send formal letters of demand to the two men who made the claims, Mr Jolovan Wham and Mr Donald Liew, asking them to withdraw the allegations. Mrs Teo added that she will not claim damages or pursue the matter further if the claims and withdrawn and she receives apologies from the two men:

“I understand that I am legally entitled to substantial damages for these serious and baseless allegations. However, I do not intend to pursue the matter further, or to claim damages, if the allegations are publicly withdrawn, and apologies given. This has been made clear in my lawyers’ letters.”

While she does not intend to claim damages, the Minister asked both persons to donate S$1,000 each to the Migrant Workers’ Assistance Fund.

Mr Donald Liew has since withdrawn the allegations and apologised, undertaking not to publish similar claims in future. Mr Wham has yet to comment on the matter.

Some netizens, however, are disturbed that Mrs Teo would ask Mr Wham to make a donation to the migrant worker fund given his extensive work helping migrant workers over the years.

Blogger Andrew Loh shared on Facebook: “I know of only a few other individuals who have given as much as Jolovan Wham in service of the migrant workers. He would gladly give $1,000 and more to them, as he has done through the many years past.”

Calling Mr Wham “the driving force behind the campaign to shine a spotlight on the migrant workers’ plight – long long before others even knew of the problems,” Mr Loh said that the nation owes him much and that Singapore should one day bestow its highest honour upon him for “serving his fellow men, acting as a decent human being with a heart of gold.”

Mr Loh added: “He fully deserves such recognition, not least because of the obstacles the state has put in his way, which have not deterred him one bit.”

Recalling how Mr Wham brought public awareness to the plight of 179 foreign workers who were abandoned by their employer 12 years ago, in 2008, Mr Loh noted that Mr Wham continues to speak up for migrant workers today. 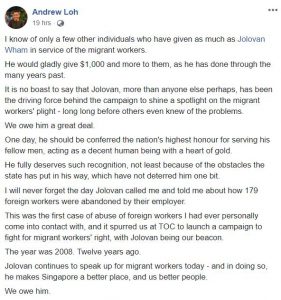 Facebook user Bianca Skold was downright outraged. Blasting the Manpower Minister for singling out Mr Wham, Bianca called Mrs Teo’s actions ironic since she is forcing a donation from someone who freely gave themselves to help migrant workers: 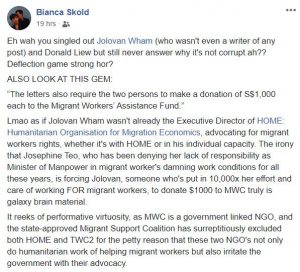 Local poet Teng Qian Xi also shared a letter from someone who is supposedly passionate about this issue. The letter states that it is “ironic to demand that one of Singapore’s most dedicated migrant labour activists, who has invested copious amounts of time, energy, passion, labour, money, and risks to his own life, donate $1000 to the Migrant Workers’ Centre’s fundraiser.”

The letter writer also criticised the Manpower Minister’s earlier comments blaming a lack of hindsight for the way the COVID pandemic spiralled out of control among the migrant workers and her lack of an apology over this:

“Another irony: the Minister of Manpower demands an apology from a migrant labour activist, yet refuses to apologise for the way migrant workers were affected during this crisis because they cannot be expected to have “hindsight”.

“They claim they could not have anticipated this, when activists like Jolovan Wham were the ones who repeatedly raised the issue of overcrowding at dormitories and other entrenched forms of neglect that have accumulated over time to cause this disaster in the first place. Was it the lack of hindsight by the government? You be the judge.”

Pointing out that Jolovan has a 13-year history of speaking up for migrant workers who live in overcrowded dormitories, the letter states that many campaigns that improved migrant workers’ living conditions have Jolovan’s stamp on it, like the campaign to ensure migrant workers be entitled to a day off in the week, the freedom to change employers while in Singapore, the advocacy to criminalise employers taking kickbacks from workers’ recruitment fees, the advocacy to enact the prevention of Human Trafficking Act, and the Foreign Employee Dormitories Act.

The letter states: “None of these amendments are perfect, but they would have been a lot weaker if not for Jolovan’s activism and his appetite for risk, when most of us would shudder to utter a dissenting opinion in public as we fear losing our jobs or livelihoods.”

Pointing out that Mr Wham not only spoke up for vulnerable migrant workers but personally helped them in his capacity as a social worker, the letter recounted: “When workers came to HOME’s helpdesk seeking for help when they were exploited in one way or another, he would do all he could to ensure they get the help they needed.

“This includes providing vulnerable workers with shelter, financial assistance, and legal advice free of charge. Jolovan also waged wars with repatriation companies hired by employers to forcefully deport workers against their will.”

On why he is so impassioned about this issue, the letter writer asserted that “charity without justice is insufficient to address systemic problems” and that people like Mr Wham who “dare to do what we don’t” should be supported. Read the letter in full here:

a plea by someone who feels passionately about this issue:"In solidarity with Jolovan Wham,It is ironic to demand…