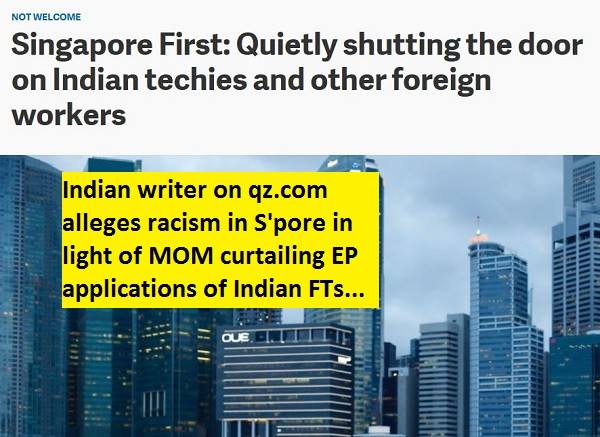 Recently, when all the Indian-based software companies in Singapore have received communication on fair consideration, with MOM curtailing their EP applications, Indian nationals have been crying foul.

MOM stopped issuing EPs to these companies when it was found that they have a disproportionate number of Indian nationals working inside. Many locals were discriminated in their hiring.

“Of course, it’s not just Singapore that’s shutting the door on Indian techies, Sabharwal says. The UK, Canada, and the US—the three countries that account for the majority of India’s software export revenue—all have made it harder for Indians to migrate to each of those locations.”

“Each of these places poses a unique problem beyond the legal woes: For instance, a resurgence of white supremacist organisations nationwide and xenophobic political rhetoric have fueled hate crimes in the US. While such acts of violence are unheard of in Singapore, an unwelcoming sentiment toward Indians has been pervading the Asian country too.”

“The city-state—where nearly 10% of the citizens are of Indian heritage and Tamil is an official language—has seen discrimination against prospective home renters of Indian-origin. Inter-racial couples are subject to constant scrutiny and Singaporean students of Indian descent have complained of being victims of racism.”

So, according to the writer, a country becomes “racist” when it puts its citizens first? What weed is she smoking?

—
Republished from the FB page ‘We want Minister Grace Fu to resign‘.Follow us on Social Media