Singapore—Workers’ Party politician Nicole Seah is very active on the ground at East Coast, often going about on weekend mornings to talk to residents about their concerns.

In last year’s General Election, Ms Seah, along with the rest of the WP team, mounted a credible bid for seats in Parliament for East Coast GRC, winning over 46 per cent of the vote against a PAP team led by none other than Deputy Prime Minister Heng Swee Keat.

Since then, Ms Seah and the WP have run different initiatives in the area, including food distribution and legal help for the residents.

Last weekend, Ms Seah and the other WP volunteers were at Block 216 Bedok Hawker Centre.

As usual, the WP leader posted photos on her Facebook account of her encounters with the residents there, and one photo, in particular, caught the attention of netizens.

In it, a masked Ms Seah is seen standing beside a smiling woman.

A young child is in front of her, presumably her daughter. But the woman is covering the child’s face completely with her hands.

The rather startling image has received many comments and has been shared over 2300 times. 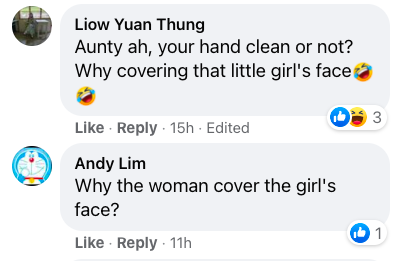 And while many of the comments have been good-natured ribbing, the mother has also been praised for protecting her child’s identity online. Still, others expressed sympathy for the girl.

Many people believe that sharing photos of young children on social media can be dangerous.

Leah Plunkett, who wrote Sharenthood: Why we should think before we talk about our kids online said, “We know that a number of the images that are pornographic of children are pictures of real kids that are taken offline and photoshopped or otherwise retouched.”

“Any time a picture is shared digitally on social media, you should assume that it could get out of your control,” Ms Plunkett added.

Read also: WP MPs back on the ground after a week of Budget debates in Parliament