Ordinary Singaporeans must – not should – start giving a thought to how PAP runs, and will ultimately ruin, our country.

It is not difficult to see the bigger picture: PAP grows the economy by simply increasing the population through immigration. This model is clearly unsustainable and must be rejected. If economic growth is as simple as growing the population, every country would have done so. None has.

Because PAP is a one-trick pony, it has not been able to create good, well paying jobs for the majority of Singaporeans. When the Global Financial Crisis hit Singapore, the government boasted that we came out of it relatively unscathed. In fact, we emerged from it stronger than any other country! But of course PAP did not disclose our miraculous ‘growth’ resulted from a record intake of 200,000 PRs in 3 years and another record population increase. This is the sort of upside-down planning we have seen for more than 2 decades since MP Goh was PM. 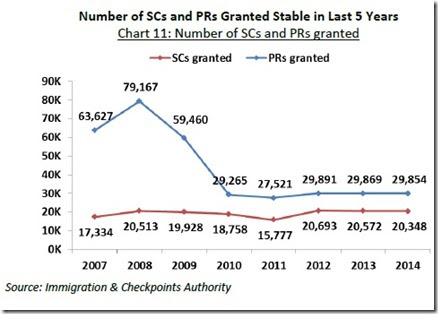 The author of “Road to Recovery” had even praised PAP for its effective policy response to the GFC despite the fact that it was the drastic population increase which did the trick for the pony: From 2007 to 2010, our population had increased by 488,000 from 4.588 million to 5.076 million: 10.6 % in 3 years.

Why should citizens have to remind the highest-paid government in the universe to do their job?

Our country is now in a mess because PAP ignored common sense and was preoccupied with their own bottom line, ie ramping up GDP figures.

Not putting the cart before the horse is pretty much common sense, no? 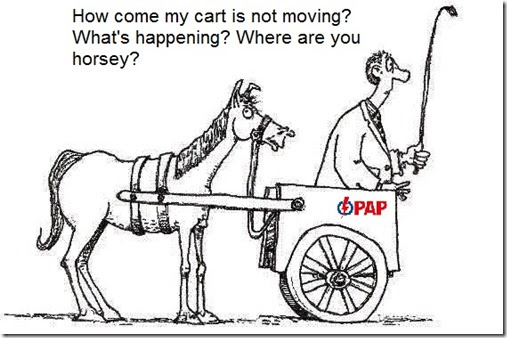 In 2013, PAP tried to pull another fast one by shoving the PWP down our throats but had not expected a swift rejection at Hong Lim Park.

It’s not that PAP doesn’t want to change its growth model but it can’t: After its addiction to its simplistic growth model for more than 2 decades, it is now TOTALLY dependent on it. One should be wary about PAP’s “low immigrant intake = doomsday for Singapore” propaganda..

Any person of average intelligence should be able to see for himself the issues created by PAP’s unsustainable growth model:

– Our wages are depressed by a senseless intake of foreigners.
– Singaporean youths are deprived of university and polytechnic places because of the excessive intake of immigrants.
– Foreigners receiving 20 times the education grant given to citizens disadvantages Singaporeans and force many to pay for more more costly overseas education.
– Citizens are deprived of proper healthcare, eg hospital appointments more than 1 year, no hospital beds available, etc.
– Thousands of hawkers have lost their livelihood and replaced by foreigners.
etc

Isn’t it easy to understand that it’s only a matter of time before PAP’s simplistic, unsustainable, pseudo economic growth model doom our country?